With each successive generation of technology, we collectively make each leap faster and with slightly less pain. However, as a music fanatic, the jump from tape to CD/mp3 was a tough one for me. Enter the Plusdeck2 Tape-RW PC Cassette Deck. This fantastic device, supplied by geeks.com, has been one of the best devices I’ve had the pleasure of reviewing. Read on for the complete story.

There is no doubt, the Plusdeck2 is not for everyone. It’s an expensive device if you goal is simply to convert a few cassettes. However, if you have music that can’t be easily made digital – such as recordings of live music with no digital source, tapes of music that hasn’t been released on CD, or (especially) cassette tapes of your own bands or music that were recorded onto cassette, this device is perfect. In my case, I had well over 200 tapes that I would like to convert to both WAV and mp3.

The Plusdeck2 fits directly into any standard 5¼” bay on your computer. Although it looks like it it might run via IDE, it does not – rather it has a a 20-pin cable that connects to a daughter board that rests in the back of your PC. The daughter board doesn’t actually use a PCI connection, just the expansion slot on your case. The daughter board, in turn, connects to your soundcard, either via two cables for 2 channel cards or via 3 or 4 for your Dolby Digital cards. In my case, I have a Soundblaster card capable of 5.1 sound. Finally, you’ll need to connect the daughter board to a serial port on your computer. This controls the device via the software.

Installation took about 15 minutes. The first, and largest complaint I have about the Plusdeck2 is the instruction manual. While it’s really not very tough to hook up to anyone with much PC experience, the device appears to be very complex for someone who hasn’t toyed with computer cabling before. Determining which cables are connected to which slots is a task, as there are several possible configurations and getting it right may initially take some tinkering to find the right combination.

That said, the requirements for the Plusdeck2 are very minimal:

Once you have the device connected, you’ll need to install the companion software. The software installs quickly and easily into Microsoft Windows and does not require a reboot. Seconds later, you should find yourself able to listen to cassettes through your computer; all controls are present in the software. While the interface is minimal and arguably not the most attractive, it’s extremely simple to use and very concise, both positives in my book. There are no unnecessary options, and it was straightforward enough that I didn’t need the instructions to begin encoding in seconds.

I immediately wanted to test conversion with no further manual reading. I popped in an old cassette tape – a fairly common Maxell XL-II type II chromium dioxide cassette from about 1993. The controls allow you to choose from several possible destination audio formats. Amongst them, you’ll find WAV and mp3 at several bitrates ranging from 8 through 256. I converted the first song to WAV format, which is the general standard lossless format.

Audio CDs use a “format” called PCM, and WAV is Microsoft’s digital representation of that. Because of Windows’ prevalence, WAV was adopted nearly universally as the standard representation of CD audio. Therefore, it is very easy, on all platforms, to create audio CDs from WAV files without losing any data or performing any major format conversion. Read more at Wikipedia.

Conversion from tape to digital file is a snap. A single mouse-click lets you convert either side A, side B, both as a single file, or both as individual files. Recording to disk occurs in real time and you can listen to the content as it plays. You will want to note that the unit is suceptible to interference, so you’ll want to keep additional noise, rattling, and computer movement to a minimum while recording. The result of conversion one were fantastic, the WAV file sounds incredible. Of course, the condition of your tape is paramount to a successful conversion.

For my second conversion, I selected 192 kpbs mp3. Again, in one mouse-click, I was able to convert the second song. When you record to mp3, it’s interesting to see that the unit actually records a WAV file, and then encodes it once the recording is completed. Therefore, you’ll want to make sure you have about 500MB available in addition to the space needed for the your mp3 if you are converting the first side of a 90-minute cassette. You’ll get a nice warning box that pops up confirming that your mp3s have been created when the encoding is done. The mp3 quality is really nice. Unfortunately, when creating mp3s, the ID3 tags are left blank, which is really not a big deal, since there’s no prepopulated information and certainly nothing like CDDB to use for this operation. 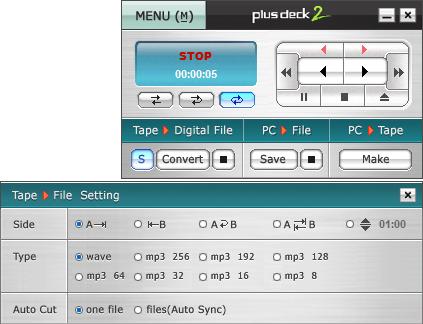 One feature the Plusdeck2 touts is the ability to recognize blank space in a playing tape and automagically break a long track into individual songs. It does this by searching for distinct breaks in the recording that tape decks create during recording. As a devout Phish fan, I have well over 100 live tapes, whose contents usually play without interuption for the duration of a side. These tapes have no track gaps, and as such, this feature doesn’t work. I found it to be a bit scary to use this feature, as some tapes have these gaps even though you don’t want them there. My experience with this feature was make or break – it did a reasonably good job at determining track breaks, however, it often inserted a two silent second track between my songs, and it sometimes clipped the beginning of the song just enough to be annoying. These breaks leave you with no recourse but to use an external program to rejoin your tracks if they are incorrectly split, or to re-encode if cut. I generally found that listening to tapes as I created them was easier and more fun, although my alternate method was also suitable.

The “alternate” method I chose was a much easier overall process. I began by encoding each side of a tape in its entirety to WAV. Then, I imported the WAV file into Audacity, the excellent open source audio editor. From there, I simply highlighted each track – track divisions are generally simple to see – and chose “File > Export Selection As WAV.” When I wanted or needed an mp3, I’d simply export the same selection as an mp3 as well (don’t forget, if you’re using Audacity, you’ll need an mp3 encoder, such as LAME). This made it very easy to encode a number of tapes to WAV and then split them at my convenience.

Although seemingly trivial, one of the disappointments with the Plusdeck2 is the front bezel. Sporting a part-indigo/part-beige bezel, I’m sure it stands out nicely in a whitebox machine that in which many of these units will doubtlessly end up. However, in my machine, which is black through and through, it sticks out like a sore thumb, and it’s tacky looking to boot. However, in fairness, it’s a small price to pay for the usefulness of the unit.

The Plusdeck2 includes the ability to push your WAV and mp3 files onto a tape. Although I can imagine this may be useful for some, I can’t think of any reason I’d want to do this, so I didn’t test this functionality.

Now, of course, there will be those users who ask why one would buy a unit like this when you could easily plug your tape deck into the “Line In” of your soundcard and use an application like Audacity to manually import. There’s no good reason not to do just that. If that’s your preference, it’s certainly a lot less expensive than purchasing the Plusdeck2. However, having done that many times before, there’s no question that it’s certainly many times faster to use the Plusdeck2. The quality is generally nowhere near what I received from the Plusdeck2, and nowhere near as consistent. In addition, it’s much simpler, and if your tape deck isn’t near your computer, it’s also much less of a mess because there are fewer cables. In my mind, the Plusdeck is worth every penny. It’s not much different than most debates we see here on OSNews – ultimately, you’re paying for the polish, ease of use, hassle-free experience.

Overall, the Plusdeck2 is clearly not targetted at all PC users. However, for those who have extensive collections of irreplaceable music cassettes, large numbers of books on tape, recorded lectures, or other cassettes, the Plusdeck2 is a fantastic addition. My experience with the Plusdeck2 was so positive and I’ve so seamlessly integrated into my routine that I am highly recommending it to all readers with cassettes they still use or wish they could still use.