Being a RISC OS user is an odd experience. It’s normally baffling to non-believers why so many (mostly British) computer users persist with the eccentric beast. It’s easy to list reasons why no self-respecting geek would trouble with it: many old or under-developed applications, poor streaming media support, lack of compatibility with key standards and technologies, limited hardware support, and there are many more. For most, RISC OS is a thing of the past, a curio, a once-promising minority OS trampled on by the juggernauts of Windows, MacOS and Linux.For some of us, however, it has retained its charm. Long-time users stick with it through thick and thin, defying the passage of time and upstart concepts like multi-threading or transparent gadgets. Against all the odds, you can still buy copies from the publicity-averse RISC OS Ltd, although in true British style they’ve made their website as unfriendly and counter-intuitive as possible (don’t bother looking for recent version information or, heavens above, a secure ordering page). You can also get a slightly different flavour of RISC OS if you buy an Iyonix ARM-powered computer from Castle Technology. In a stroke of marketing genius, this version is developed independently and is unavailable for any other machine. Although the two types of RISC OS remain broadly compatible, both companies have decided that devoting time to public spats and legal arguments is preferable to actually developing the product. Which is a pity, because the basic OS is still a joy to use, and in some areas remains remarkably productive. 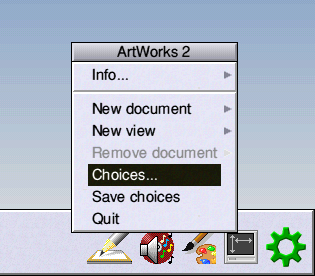 First off, there is the interface. Designed in an era before taskbars and context-sensitive menus appeared anywhere else, the RISC OS iconbar and pop-up menu system remains a pleasingly elegant way of launching applications and using them. The iconbar, in its day, was a fantastic innovation (see screenshot 1). Hardware such as drives and printers sits on the left, as God intended, and applications sit on the right. There’s no program menu (unless you use a third-party application), and no trays cluttered with utilities and performance-sapping processes. Applications don’t have menu bars attached to windows, but instead use the second mouse button to pop-up choices anywhere over a task’s windows or its program icon (see screenshot 2). Nicely, this allows a clean division between options for the application as a whole or the file currently being edited.

Simplicity and clarity is another draw. The OS was designed to work with very low-powered computers by today’s standards, and as a result flies along very nicely for non-intensive tasks. Deft use of a three-button mouse makes shifting windows around extremely quick and hassle-free. You can still edit window contents when they’re under other windows, which sounds like a minor thing but really makes life much more pleasant for everyone. Comparative lack of bells and whistles, a problem for some, is a positive boon for RISC OS fans. We don’t get asked to update our software every five minutes, or have virus checkers pop-up without being asked-to, or have talking paperclips emerge from the shadows when writing a letter. All of this is good. Really good.

On top of this, RISC OS still has some great applications which, for ease of use at least, often leave their bloated competitors on other machines far behind. Take ArtWorks, a lovely vector drawing programme maintained by the sainted Martin Wuerthner of MW Software. Speedy and clean in design, it nonetheless boasts a very respectable feature set and is being constantly updated. EasiWriter, a word processor, Ovation Pro, a DTP application, and Messenger, an email client, are similarly distinguished indigenous programs. In addition to home-grown stuff, a heroic band of developers led by Peter Naulls has made porting applications from Linux-like environments a great deal easier: although incomplete, the ubiquitous Firefox just about works on RISC OS, and will hopefully be integrated further in the months ahead. The Unix Porting Project lists dozens of applications on their website, most of which are recent additions to RISC OS.

It’s not all rosy, however. Web browsing, even with Firefox, can be a daunting challenge, and there’s little support for modern video standards or nice things like Flash. The hardware is a bit creaky as well: the fastest ARM-based machine is the Iyonix, clocked at a not-very-eye-watering 600MHz. Its diminutive rival, the distressingly badly-named A9home from Advantage6, weighs in at an even more modest 400MHz. RISC OS’s generally lightweight nature compensates for some of this, but activities like 3D modelling or heavyweight compilation aren’t much fun. Emulation, using commercial products like VirtualAcorn, provides access to faster PC hardware, but brings with it some of the disadvantages of sitting on top of Windows (see screenshot 3). Despite this, many developers have chosen this as a way of keeping hold of their beloved RISC OS while having access to the power and compatibility of Windows. Emulator solutions for MacOS and Linux may eventually emerge in due course.

So, all this being the case, why do I use RISC OS? Well, apart from a slight perverse enjoyment of using something different, lots of stuff really is easier and nicer than on other platforms. I briefly dumped the environment after its creator, Acorn Computer, folded in the late 90s. But I came back eventually, and will stick with it for as long as the party lasts. As for how long that is, who knows? RISC OS really ought not to be around any more. It’s appallingly marketed, has a tiny pool of developers, and those that are left are fighting amongst themselves. But I still like it. It makes me smile. And when was the last time Windows did that for you?