I have been a VoIP (SIP) fan-girl for over a year now and as such I have searched for or tested lots of related devices, clients and clever services. This is a list with the best SIP clients on a wireless multi-function mobile device, read on for more.In this article we don’t include USB-based phones or plain SIP WiFi-based phones (e.g. from D-Link, Linksys, Netgear, FiWin etc) because these devices don’t do anything else other than VoIP (and in some cases they have limited or not fully compatible SIP support too) and that would force a user to carry multiple devices with him/her. This is why we tried to find cellphones or PDAs that offer additional abilities that might prove useful to the user in conjunction to SIP support.

5. Palm Lifedrive with the Articulation client

This is a client that works pretty well, although it is not bug-free (especially when it tries to connect to other somewhat-buggy clients). There are 2-3 more VoIP applications for PalmOS, but Articulation is the best there is. Unfortunately, Palm has been peculiar to not include microphones on most of their PDAs (all PocketPCs have mics) and so Articulation will run out of the box and with good connection speeds only in the Lifedrive.

The Palm Treos can work with Articulation but you will have to be close to an EDGE tower to make sure that you won’t have lag while chatting (GPRS/EDGE and even 3G have more lag than WiFi does). The Tugsten T|X would have been a cheaper, better alternative to the Lifedrive, but you will have to buy an external microphone for it before you can use any VoIP client with it. It’s a real shame that the T|X doesn’t have a mic by default. The Tugsten E and E2 PDAs have mics in them, but they don’t have WiFi and so you would need to buy either the Palm WiFi card ($70) or a Bluetooth Access Point ($60-$120). Hense, the Lifedrive is the best out of the box solution so far. Sony Clies don’t work because of their sound driver.

4. PocketPCs with the SJPhone client

There are about 5-6 different VoIP SIP clients for Windows Mobile, but trust me, none works well (remember, Skype is not SIP-based). The only one that comes close is the SJPhone client, which you will have to learn its quirks and it’s mind-blowingly complex setup windows before you use it in a satisfiable manner. Problem is, that it seems that the Windows Mobile version of SJPhone has been dropped from development and so I don’t think that the remaining problems will be fixed. But nevertheless, it works ok most of the time.

To use SJPhone you will need a PocketPC with at least 300 Mhz CPU power. I use it on my 200 Mhz QTek 9100 smartphone via WiFi, but it brings the phone to a crawl when I do so, so I wouldn’t really recommend it for those who want to keep their sanity and not get angry at their device’s speed. Ultimately, I think that SJphone requires a 400 Mhz CPU to run well and this is just because the application is not very optimized for ARM rather than Windows’ or the CPU’s fault. Check here for a tutorial on how to get Gizmo working on the SJphone.

Finally, Windows Mobile 6 (aka “Crossbow”) will offer its own SIP client — rumors say. But such devices are a year off from now. 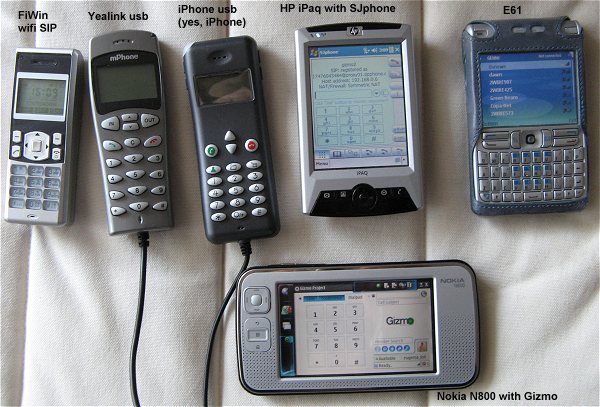 The Nokia Internet Tablets are doing a good job offering SIP support via Gizmo. Unfortunately, there is not another well-behaving SIP client as of yet for these babies that will allow you to use any random SIP service. The good news is that Gizmo 2.x is ported to the N800 (our review) and this version allows the user to side-register on other services aside Gizmo itself. The bad news is that there is currently a bug where if you leave your Gizmo client connected at all times (as you are supposed to do), it leaks so much memory that the N800 reboots itself. I have reported this bug to the Gizmo folks and they are looking at it. I am expecting this problem to be fixed soon because otherwise the N800 can not be considered a good SIP device.

Normally, this device would have been my No1 choice, but the E61 ships today still with an older firmware which makes SIP support near-impossible (it requires either a PBX or a proxy on your side of your firewall or the SIP service to support “Reverse NAT” or a wifi router that does all that for you). Users serious about SIP who bought the E61 must use the NSU application (free at Nokia’s site) to update their firmware to the latest v3.03.xxxx version in order to be able to make use of STUN support that will give them access to most of the free SIP services around the globe. I successfully use my E61 with Gizmo, Voipbuster, Ekiga, FWD and Broadvoice. One other great thing is that VoIP is integrated to Nokia’s OS and calling framework, so it feels that you are using a real phone! The E61 is a great cellphone, organizer and media/net device. Thumbs up!

The Nokia N80 Internet Edition is a special edition of the N80 that adds SIP support with STUN (just like in the latest firmware for the E61). Because it comes out of the box with STUN support, it takes the first place in our list (otherwise, I consider the E61 a better/cheaper overall device, even if it doesn’t have a camera and uPnP support). A very good device overall, just make sure you buy the “internet edition” instead of the normal N80i.

There are two more devices that can also become very strong players in the SIP world, and these are the Nokia E60 and E70. Just like the E61 and N80IE above, they run the same operating system and SIP stack. Problem is, Nokia has not released a newer firmware for these phones to take advantage of STUN (Update: Fixed firmware for the E60 is out, but not for the E70). If Nokia does indeed releases these important VoIP updates for these phones, then buy them and update their firmware immediately, otherwise ignore them as the chances of getting anything working with the free online services will be slim (although they work fine inside a corporation building because the proxy of the SIP server will be on the same side of the firewall/router so there is no immediate need for STUN). Especially the E60, is pretty much the cheapest of all these devices shown here, currently selling at about $260. If only we get a firmware upgrade…