Everytime we feature a multimedia device review here at OSNews the question is always the same: “…but does it support OGG?“. Well, this time we do have such a device in our lab to test out for you. Geeks.com sent us in the iRiver E10, a powerful multimedia music and video player.

The E10 is a 6GB hard drive-based portable music and video player that comes in both black and white colors. It is not bigger than the iPod Mini or an iPod Nano when inside a case. It has an FM radio tuner and recorder, a text reader, a Flash-gaming/application ability, an alarm clock, a .jpg picture viewer, voice recording and TV remote-control functionality. In the box we found the iRiver E10, a 18-pin-to-USB cable (proprietary port), earbuds with cushions, the iRiver Plus2 software, some instruction manuals and a pouch to protect the player from scratches. The E10 does not come with a wall charger, all charging happens via its USB cable (although you can buy a power adapter on eBay). 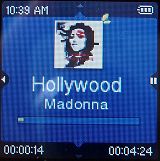 The iRiver E10 carries out all of its actions with only 4 main arrow buttons. The left key goes “back”, the right key goes forward into sub-folders and it shows a special menu each time that it’s long-pressed (specific to the submenu you are currently browsing), while the up and down keys go/play either the next/previous item or when long-pressed they scan back/forward the currently playing media file. On the left side of the arrow keys there is the “special” button called SmartKey, which can be assigned to do different things, e.g. go to the main screen, or go to the “Now Playing” screen etc. On the top right side of the arrows, there is the on/off button which puts the player into standby (the player never really turns off for real and so it turns back on from standby instantly). On the left side you will find the Lock slider button. When you lock the player, then the IrDA is activated and the player can be used as a remote control for your TV (vol up/down, channels up/down, mute/unmute, power on/off). Below the Lock button there is the Reset pin-hole which resets the player and does a full reboot (we had to do that once, after our player crashed but other than this one time the player was very stable). The player’s iRiverOS v1.0.4 operating system (the players come by default with v1.0.3, so upgrade instructions are here) loads in about 15 seconds after a full reset (which hopefully you will never have to do). On the right side of the player you will find the microphone, the vol +/- buttons and a lanyard/wrist-wrap hole. On the top is the location of the IrDA and at the bottom there is the 3.5mm audio jack and the proprietary connection port. Overall, the device feels very nice in the hand and the buttons are on the right place.

The screen is a 1.5″ color 128×128 TFT. The whole UI is written in Macromedia Flash and it’s fully themable! Learning to use the UI it will take you about 1 minute, but really getting used to it will take you about 15 minutes. At the beginning I had my reservations about doing everything with just 4 buttons, but after a while it becomes intuitive. View a video of the device and its UI here. On the top left side of the screen there is always the time showing up and on the right side the battery life left. In the main screen there are several root menus and their sub-menus, for example: 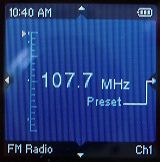 Extras: Recordings (it even supports voice detection), Alarm Clock (several options here), Flash Games (we played a few, they worked really well and fast), Text Reader (.txt files are very readable with the “small” font), Browse Device (view all your files). The E10 has a feature called Btamin, which is short for “brain vitamins”. These are some audio/video .swf files (download here) that are drag-n-drop’ed in the /btamin/ folder of the player and when played they supposedly help the users to cope with stress or unhappiness.

FM Radio: Click up and down to move through the FM slowly, or press and hold to scan automatically. Pressing the right arrow button it goes into preset mode where it only cycles through your 20 presets instead of the whole FM range. After you long press the right arrow button the special menu appears: Record, Saved FM Recording, FM Recording Quality, Save Preset, Stereo/Mono, Auto preset, Tuner region. The FM Radio works very well, it has amazing reception compared to cellphones with FM support, but it won’t continue playback while you are reading a text file. You must stay in the FM app to have it activated. 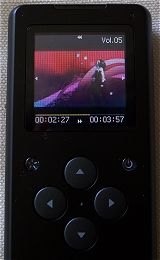 Music: “Play All” or sort via artists, songs, genres, albums or playlists (quick list or via rating). Tags are supported and that’s how songs are sorted. When playing a song, you can long-press the right arrow key and more options are appearing: play mode (normal, repeat, repeat one, shuffle, shuffle+repeat), add to Quick List playlist, select EQ (Normal / Classic / Live / Pop / Rock / Jazz / Ubase / Metal / Dance / Party / Club / Custom EQ / SRS WOW), Rate song, scan speed, playback speed and Lyric display (lyrics require this app). If you upgrade your firmware to 1.0.4 and use the iRiver Plus3 media manager (instead of Plus2 that comes with the CD), you get album art support. You can easily switch from one song to the next in the list by pressing the up/down arrow buttons. Overall, this is a very intuitive player that supports OGG, mp3, WMA (protected too) and ASF. It played all the files we threw at it, except one OGG file that seems to have been encoded in a non-compatible way (although our other OGG files played fine). The only thing I do not like from their Music interface is that when you go out of the Music menus and come back in, the system does not remember exactly in which song you were browsing or listening, so the scrolling starts again from the beginning of the song list (the iPod remembers where was at).

Pictures: You can have subfolders or playlists for different pictures, or you can choose to view them all. There is slideshow support, or manual picture loading. In the “settings” menu of the Pictures submenu you can set Image Delay, choose from lots of Transitions and set the current picture as a Wallpaper. Images must be 128×128 and in JPG format. 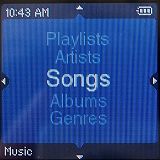 Videos: You can have sub-folders of videos, or simply put them all in one place. Videos must be 128×128 encoded in XviD MP4-SP and 15fps. iRiver says that compatible videos must have 128 kbps mp3 audio in them and 384 kbps video, but this is not true. I encoded via MediaCoder a 128×128 video (download my MediaCoder preset file here, just edit it to change the “USERNAME” word to your Windows’ user name) which respetected the aspect ratio at 128kbps for video (use 192kbps only if there is a lot of motion, e.g. sports) and 64kbps for audio (128kbps should only be used for music video clips or concerts). In fact, encoding at 128/64 kbps video/audio over the suggested rates, it will save you over 1 MB per minute of hard drive space! You can download this video that I encoded for the device in order to check out the quality produced by MediaCoder via my presets. On a modern PC, encoding with these settings will take you 16 minutes to encode a 45-minute episode and about 40 minutes to encode a two hour movie. Some will argue that the screen is too small — and it is small — but remember that a 4:3 video won’t be smaller than watching it on a Sony Ericsson 176×220 1.8″ cellphone screen (because these screens are 3:4 instead of square and so overall, a 4:3 video’s viewable surface is about the same). The user interface of the Videos is similar to the Music’s, you press and hold the up/down arrows to scan through a movie (it has a very fast response when scanning) and audio/video is always in sync!

Settings: Change date/time, create a custom EQ, Fade-in on audio (there is no gapless playback), Display (change wallpaper or a Flash-based UI theme — download my wallpaper below for your E10), choose what the SmartKey want to do for you (e.g. go to Home, repeat, Playing now, etc), when to auto-power off/sleep or turn off screen, choose your brand of TV for usage with the Remote Control (it worked perfectly with our Sharp HDTV), and “About”. In the Advanced submenu, you will find the Language menu (select from MANY languages, including Greek), sort files ascending/descending, text scroll speed from when a song title does not fit in the screen, system information (our OS version is 1.0.4 KR after upgrading) and “reset all settings”.

Audio quality was seriously top notch. As good as in our iPods. It can be really loud too: volume goes up to “40” while having the device at “5” is already enough for our ears! We tried the included earbuds which had a very good sound quality, but my ears are small and so they fall-off as any other earbud I ever tried. For most of the testing time I used my over-the-head professional-grade Sony headphones (MDR-XD400). 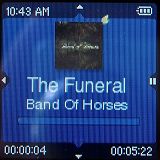 Battery life lasted an impressive 23 hours in our music tests (although not as much as iRiver claims at 32 hours) and about 4.5 hours for video. I am sure that video battery life would have been better if there was an option to reduce backlight strength, but there isn’t any (there is only an option to tell the device when it should turn the LCD off completely but not how much backlight to use). One interesting aspect of the battery the E10 uses is that it charges very fast, wihin minutes for 50%.

The device came with iRiver Plus2 in the CD, but we highly recommend you upgrade to Plus3, which is much better and supports album art. However, the media manager would refuse to transcode any videos for the iRiver, we always got an error that “mencoder could not be found”. This is why I used MediaCoder to do our video encodings with my preset. The encoding free programs most E10 users use, iRiverTer, we found it to be a bit crashy while BADAK had trouble automatically using the right aspect ratio and it also had codec problems with h.264 source videos. 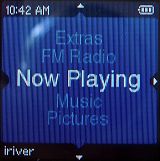 Overall, I liked the Plus3 media manager, but I didn’t like the fact that the player won’t recognize pictures and songs when you simply copy them in the right place via mass storage USB 2.0 because it needs a database update by a media manager application (it will recognize Videos, Themes, Flash games, text files automatically though). This means that for alternative operating systems, to copy your music and pictures you will need a special iRiver application for the Mac (resources here, here, here and here), or a Zenity/Bash script like this one by Ketil Wendelbo Aanensen if you are under Linux. Maybe someone would like to write a Rhythmbox or Banshee plugin or maybe update the old iTunes plugin linked above?

Overall, we are highly impressed by the E10. iRiver is among the big players in the portable multimedia market and now we know why: they have great products. And if you are an OGG supporter, this can be the player for you! I am seriously thinking of replacing my 4GB iPod Mini with this unit.