Hi-Mobile sent us over the Sony Ericsson W580i Walkman feature phone for a review, and we give it a whirl. It’s been over a year since the last time we tested the non-smartphone Sony Ericsson platform and it’s interesting to see the advancements in the software department.The W580 is a quad-band GSM and EDGE cellphone. It features a QVGA 2″ screen, an M2 slot, 12 MB of available storage, Bluetooth 2.0 with A2DP support, a 2 MP camera, a 900 mAh battery, and an FM Radio with RDS. It is a slim, slider phone that weighs just 94 grams. In the box we also found a 512 MB M2 card, a handsfree with a 3.5mm adapter, a travel charger, the Li-Po battery, a USB 2.0 cable with support for SE’s “Fast Port”, the PC suite in a CD and the user manual. 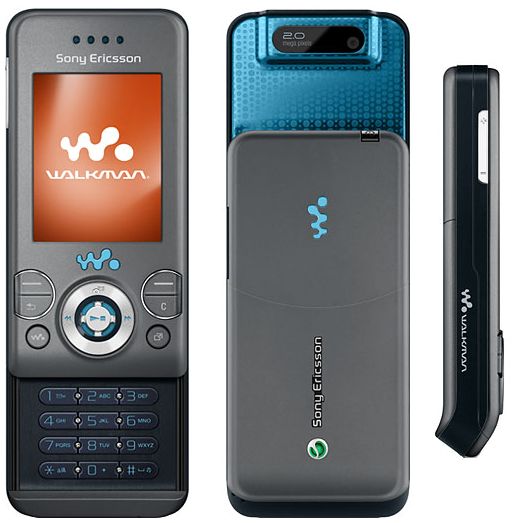 The phone feels very good in the hand, as it is pretty slim although I can’t say that I am a fan of the twisted lower side as this can be problematic if you are wearing tight jeans. On the left side you will find the up/down volume buttons, and on the top the on/off button. There are no extra camera or special purpose buttons on the sides other than the normal buttons on the front of the device: softkeys, back, backspace, walkman button and “shortcut” button. The 5-way joystick is very rigid and solid and it doubles also as walkman control and the camera’s application loader. The stereo loud speaker is situated behind the joystick so if you are listening something aloud, you might be careful to not have your fingers on the joystick. When you slide the phone up, the 2 MP camera can be found on the back of the phone.

We found the construction of the phone overall pretty good, except two points: the keypad and the battery door. First, let me say that I hurt my index finger trying to remove the battery door to change SIMs in it. It was impossible to remove it using your hands. I had to employ a sharp knife, and place the knife at the bottom of the phone, where the wrist-wrap holes are to be found and open the phone’s battery door that way — in danger of destroying the door, of course. I just found it impossible to do it the normal way, sliding the door way down that is. Regarding the keypad, the actual buttons feel that are attached on the phone at their center only, and especially the # key feels that it will popup at any time. While this might just be my inaccurate perception, the point is, it does not make me trust the keypad. 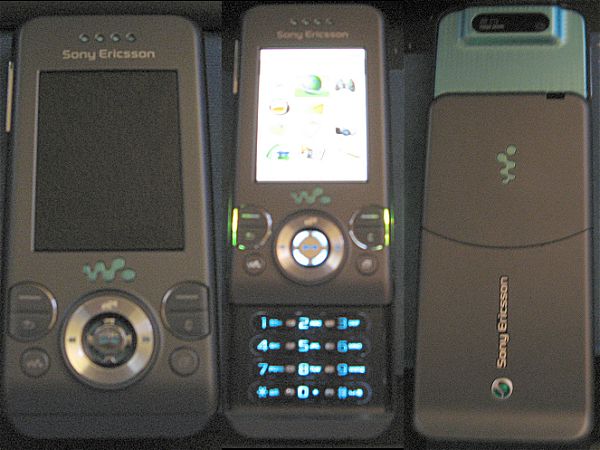 Without a doubt, this phone will be compared to one of SE’s most popular phones in the US: the W810i. There are some reasons to upgrade to the W580i, and some reasons to stay or buy the W810i instead. The advancements are: QVGA screen compared to W810i’s QCIF screen, Bluetooth 2.0 instead of 1.2, upgraded software with A2DP and PAN support, better Netfront memory management, much better Walkman. The disadvantages are: worse camera with no flash or autofocus, no IrDA, slightly worse battery life. Everything else is the same between the two phones, except the usage of an M2 card instead of Memory Stick Pro Duo. So, depending what you are after in terms of features, you can decide one against the other. 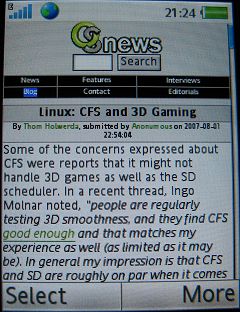 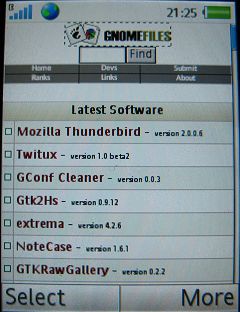 Speaking of battery life, the phone managed about 7 hours of talk time and we approximated 7 days of standby. Reception was top-notch, every bit as good as W810i’s, maybe even a bit better. Audio quality was also top of the hill both ways. In fact, the messaging and contacts/Log usability experience was very positive compared to phones from LG or Motorola. 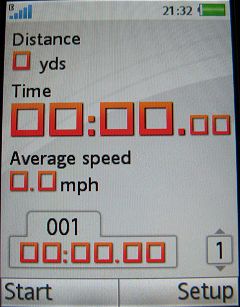 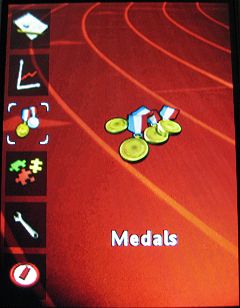 The W580i is a young people’s (or at least, active people’s) phone. Except the colorful, updated Walkman software, there are 3 applications to be found that have to do with physical exercise. In the front screen, you will find a pedometer, there is a calories/weight counter that saves the information as an .xls file and allows you to share the information with others, and there is also track & field manager — complete with… how many medals you got! Finally, there is a cool little app that lets you know how many steps aways cities of the world are. For example, if you are based in New York and you set as your target city Los Angeles, the application will approximate how much you will have to walk to get there. 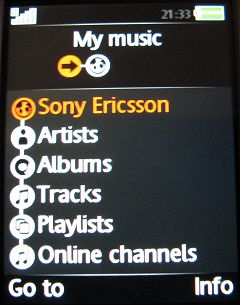 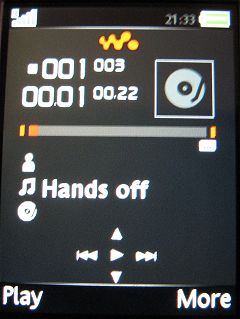 The Walkman application has seen an upgrade since our previous SE phone we had for a review, the W810i. The UI now makes much more sense. It is easier to move to different screens and there is also playlist and album art support now. However, it is still not as good as an iPod. Jumping from the song list to the MyMusic menu and the main music screen, navigation is still not tree-based as it is on an iPod and so it is a bit confusing at first. However, SE has worked on the “hissing” problem, an issue that plagued most music phones in the past few years. Now, when listening to a song via Walkman, the sound is crystal clear and when the sound card is turned on and off you don’t hear that horrible crackling sound. Samsung phones still haven’t fix that problem on their devices, so kudos to Sony Ericsson for providing more authentic mp3 player experience. Finally, the phone sports two lights on its left and right sides, and depending on the “theme” you use, the lights will flash in different colors in sync with the songs currently playing on your Walkman software. 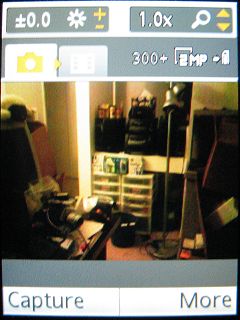 The FM radio has seen an interface upgrade too, although what really grabbed our attention was the TrackID application that is able to “listen” to a song from the on-board FM radio and then connect to a server and tell you which song that is, based purely on the tempo/rhythm! How many times you heard something on the radio and you wondered who that artist was? Well, wonder no more!

The rest of the software has also seen updates and changes, mostly minor things, but things that do constitute in a solid software upgrade. The new camera software is easier to use than W810’s for example, and Netfront 3.3 does not run out of memory in every corner! Java apps also seems faster too, e.g. Opera Mini, GMail and Google Maps. It’s a joy to be able to run multiple java apps at the same time and switch between them, using SE’s new app-switching facility. We were able to run 6 java applets at the same time before the phone started to perform slower. More over, A2DP worked very well, and we were also able to connect the phone to the internet not by using GPRS, but by using the PAN Bluetooth profile, which connects to a Bluetooth router instead of a WiFi one. How cool was that? Overall, software would be the No1 reason to upgrade to the W580i from an older SE phone rather than its hardware qualities. It is my opinion that Sony Ericsson has the best user interface/usability in the non-smartphone market with their current platform.

Right-Click and “save as” for a 3GP video capture sample

On the downside though, the W580i camera is a bust. Not only lacks autofocus and even a flash light, but it just doesn’t take good pictures. Especially under low light (with “night” effect on or off), the pictures are pretty bad. More over, the phone will only record in QCIF size and 3GP format, even if it is able to playback MP4 video in QVGA size with no problems. I believe that this was a market segmentation decision at Sony Ericsson rather than a true hardware limit.

In conclusion, we would say that the W580i is a worthy upgrade over the W810i and many other SE phones, especially if you live in USA and you try to find a phone that both has a QVGA screen and a quad-band GSM/EDGE ability. SE does not have many such phones, and so the W580i is one of the best solutions currently.