Home > Editorial > One Flew Over the Songbird’s Nest

Songbird is a new open-source music player that has this week landed at 1.0. Songbird is described as a “web player”– a music player for this modern, connected era. It blends the web-rendering core of Firefox (Gecko), with the media capabilities of GStreamer– a cross-platform, open-source media playback engine.

With an integrated (and capable) browser, Songbird allows you to wander off to find new sources of music all within the app itself. It’s in this area that Songbird can claim many features not readily available in other players:

This article will cover me reviewing the Songbird experience, coming from an iTunes user with an already chunky iTunes library of some 6’000 items.

Songbird is readily available from getsongbird.com in these flavours:

I’m reviewing this app from the standpoint of a regular user already using iTunes, who has decided to download and try out Songbird, having heard good word about it – much the same story as users trying out and switching to Firefox.

Whilst this might present a somewhat unfair position of comparing Songbird to iTunes in someway, I feel that doing a â€œclean-roomâ€ evaluation of Songbird would not prove much in the real world, as well as it would deny testing one important feature of Songbird: it’s iTunes importing capabilities.

Migrating from one app to another is always a very fearful experience. You don’t know if the new app is going to make a total mess of your old data and leave you with a clean-up operation that will take weeks. Before running Songbird for the first time, I made sure my Time Machine backup was up to date meaning that I could do a hassle-free roll back should things go wrong. Throughout this review I’ll be keeping my eye on how well Songbird co-exists with iTunes.

Upon starting the app and after a licence agreement and an introduction page, you are presented with the import options: 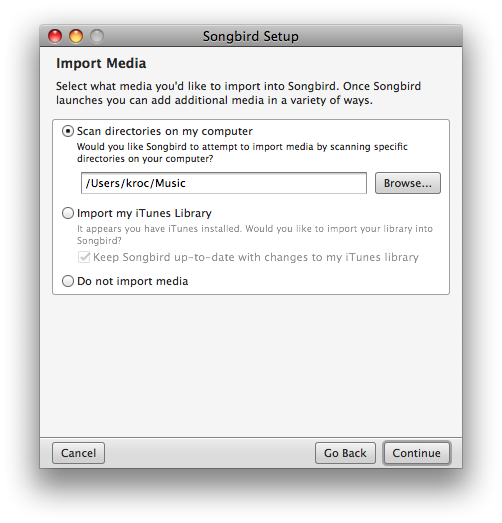 Thankfully Songbird provides the ability to import an iTunes library, and can handle external changes made by iTunes. 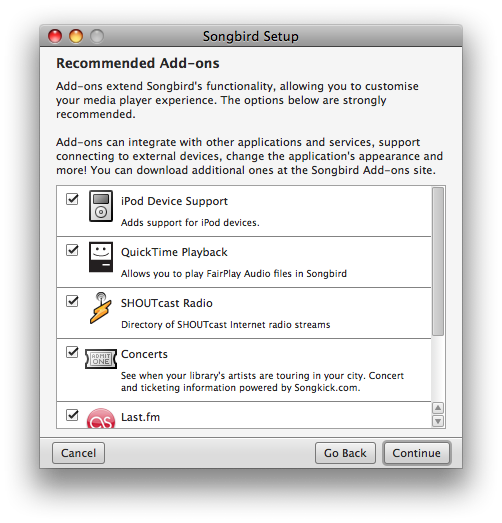 The next page provides some default add-ins to expand Songbird functionality. Personally, I hate any advertising in the software I use, especially stuff that gives information out to websites in order to sell me stuff. However, I let these add-ins be as I would like to experience the default Songbird design.

If anything the benefits of easy plug-in functionality via the add-ins means that one can be mix-‘n’-match according to taste, rather than being lumped with ‘bloat’ with no option to remove it (A problem that greatly plagues software with ever increasing version numbers). 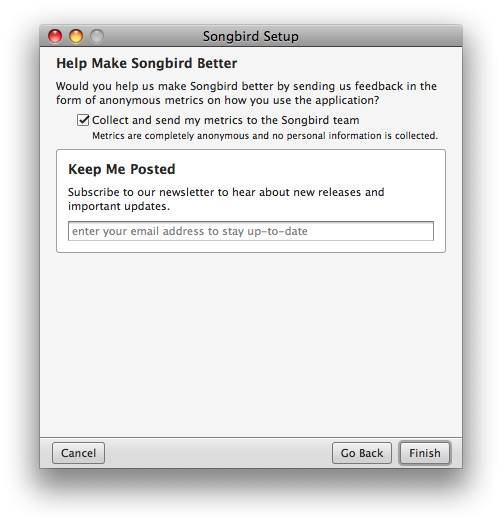 Hmm, checked by default. Personally, I’d close and remove the app right now. I find that kind of behaviour massively disrespectful. Real were pulling this stunt years ago and I still don’t trust any software that asks for an email address, optional or not. Regardless, the average user would in most cases just click “Finish”.

Songbird took approximately 5 minutes to import my library of nearly 6’000 items.
Both iTunes and Songbird start from cold in about the same time (5 seconds).

The playlist folders I had in iTunes were not imported, instead they were converted into playlists themselves. This is kind of a nuisance, as I had been relying on the functionality of iTunes automatically combining playlists live by viewing the parent folder.

There’s nothing special to say about Songbird’s look other than it’s mostly like iTunes, but with the main toolbar at the bottom. This can be switched to the top, via “View > Player Controls > On Top”. The other bar at the top is the tab bar, allowing you to browse and search websites. 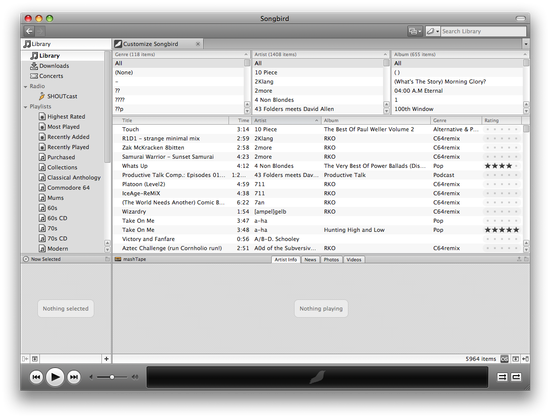 The various display panes (mashTape / Album Art) can easily be hidden by the docking buttons below them. Songbird is extra flexible though, letting you get add-on side panes such as a folder view or lyrics browser, as well as swapping around which side-pane module is shown in each of the panes. This flexibility and easy manner to get new modules for the panes should allow for a lot of innovation to happen outside of the main Songbird development.

The genre browser has a different kind of button to hide it which is quite cryptic and not immediately obvious. It’s left of the search bar, but you can always choose the “View > Media Views > List View” menu.

mashTape can help solve a lot of your curiosity about various songs and artists, automatically pulling in (hopefully related) info from the web. 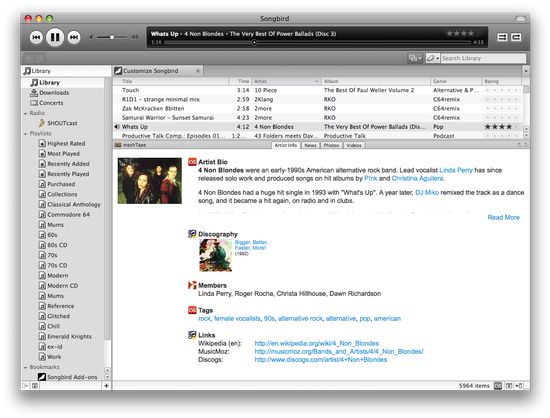 The “Photos” tab finds pictures from Flickr. It seems like something that would entertain YouTube users, rather than a feature I would actually want to make use of. 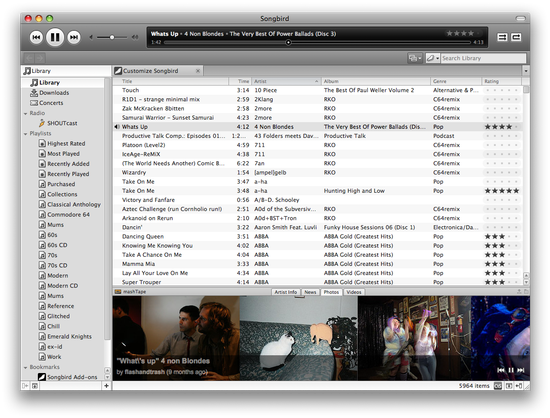 Any audio player lives and dies based on its ability to play audio. Songbird’s wide support for audio files is going to please some people. Between users hurt by Apple removing FLAC from iTunes, and supporters of open formats like OGG – Songbird caters, but Songbird even plays nicely in a proprietary world; it being able to play DRM protected tracks via hooks into QuickTime and Windows Media Player, as appropriate.

In the mini player view though, I did get odd error messages saying that the song could not be played because it was encrypted, yet it was already playing fine. Clearly just a minor bug.

There is no cross-fade support yet, and I encountered a number of jittery moments where songs cut off a second or two early, or the player just stopped entirely after a song and hung there on the next song waiting for me to hit the top of the box to kick it back into playing.

I miss not having iTunes simple party shuffle mode, and when I do shuffle the play order in a playlist, the focus doesn’t follow the current song as I skip

Overall though, if your library is diverse and you’re more particular about the formats you store your music in, Songbird will work well for you. Songbird plays generally well with your iTunes purchases so there’s no real reason to not try Songbird out for yourselves.

Without effort I found a large number of bugs, here’s some of the notable and easily reproduced ones

Preferences sometimes broken
Trying to open the app‘s preferences did not work – it was the first thing I tried when using the app for the first time. Then the app wouldn’t close and had to be force-quitted. If I do get the preferences open, it often doesn’t show some of the sections when I click on them.
Main window disappears when focus lost
For a long period, the Songbird window simply hid itself everytime I changed focus to another app
Web browser functions breaking library view
The “View > Page Style > No Style” menu, despite being for web pages, works in the library view and disables some of the CSS styling of the app
Default shortcuts for next / previous song…
…are Ctrl+Arrows, which are assigned to switching spaces in OS X. iTunes uses just plain left and right arrows when the list is in focus
Keyboard Shortcuts help bug
If using the mini-player, clicking the “Help > Keyboard Shortcuts” menu brings up an open-with dialog
Pressing the close button closes the whole app, entirely
In OS X, the red bead closes the current window but doesn’t usually quit the entire app too, so that the app remains in memory and can be re-launched quickly, or can continue doing something in the background – like, I don’t know – playing music, perhaps. Cmd+Q, or the menu item is the only thing that should quit the app entirely.
Cmd+W closes tab, won’t close window
Cmd+W closes each browser tab, but then doesn’t close the main window when only the library view is left. I’m used to pressing Cmd+W to dismiss iTunes (or any main Mac app), but leave it running

A feature is, of course, not missing if it was never meant to be there in the first place. However, as this is not a clean-room review of Songbird – whereby I review something by living in a closed box, unaware that it’s no longer the year 2000 and other products have existed for a long time – I take the viewpoint that what Songbird doesn’t have in parity with iTunes is therefore missing as far as a regular consumer is concerned (should they make use of that feature).

That is simply the harsh reality that open source developers must face, and that Songbird does want to face (given it’s current iTunes importing ability), but falls short of in the following ways

None. This was not a goal of 1.0 and is something to be visited in later versions of Songbird, however what I found shoddy about this fact was that Songbird does nothing to acknowledge that it does not play video.

It could exclude videos from showing up in the library. It could warn me with a message when trying to play a video – instead you just get the sound. It could do something to better warn you that video is not currently an option – rather than hide this fact on the very bottom of their features page.

You can emulate podcasting by subscribing to the podcast’s website or RSS feed – however this is just a static pull of listed audio files. No video support. No auto-pruning. No tidy categorisation / management.

I appreciate it’s a new app and has taken a long time to create, but what am I expected to do? Not use CDs until they get around to it? It seems like Songbird 1.0 relies entirely on a symbiotic relationship with iTunes.

To call this product 1.0 is like throwing in the towel, accepting that it’s just not possible to beat iTunes, or even Windows Media Player, or even support basic features – like playing a CD, that’s been possible for around 16 years.

Songbird is a project that, given its limited resources, has to look toward the future first and pickup the past on the way. The time and effort spent in web-integration and add-in support is what makes Songbird a notable player. For if Songbird were without these two aspects of its design there would be absolutely no reason to live with what it’s missing in lieu of what it has.

I believe that Songbird will succeed better in the Linux environment, which – dare I say it – has a more Unix-like software ecosystem that provides many smaller apps to achieve the tasks of one large homogeneous one. Linux distros all have their preferred CD-ripper / tagger / burner and video-player. In Mac OS X and Windows, maybe not so much the case.

Songbird is not an app I will be using anytime soon. It is an app however that covers its nakedness with its innovation. There may be hope, then, that its emperor’s clothes approach to features will be seen as beautiful in the long run.