Three months after the previous release, the ReactOS Team has released version 0.3.8 of their Windows NT-compatible operating system. We have taken a short virtual look at this new release. In addition, the project will have a booth at the FOSDEM event in Brussels, Belgium on the 7th and 8th February. Several members of ReactOS Development Team along with the Project Coordinator will be attending. You can have a chance to test the live system, speak with developers, and get a closer look at their project.

The major changes of ReactOS 0.3.8 include:

As always, the changelog for this release is rather huge. You can download the release from the website’s download page.

Giving ReactOS a go isn’t hard, as the team provides ready-made virtual machines for use in VMware or Qemu. I downloaded the new release for a quick test drive through VMware, and I was impressed with what I saw. The system boots very quickly, and apart from the use of the Tango icon set, it looks exactly like Windows Classic. There additions as well, of course, such as virtual desktop support. 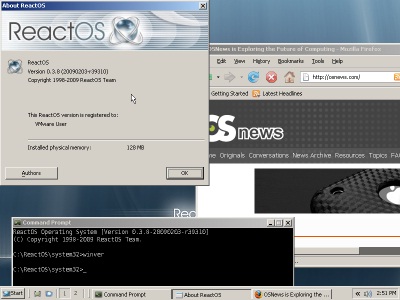 ReactOS comes with an application called Download!, a sort of crude package manager that lists a number of Windows applications known to work with ReactOS. It can download and install them for you. Installing Firefox 2.x is a breeze this way, and seeing it all run so well is an odd experience. 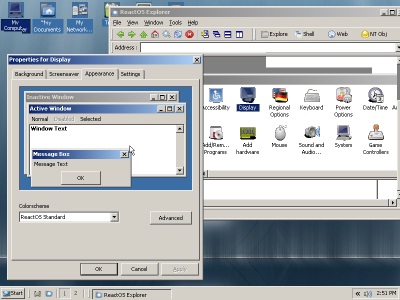 Still, there are many rough edges. In my short use I experienced a few crashes, and a lot of screen remnants. The biggest problem, however, is the extremely unreliable and slow net connection; I’m not sure if I should blame Firefox, ReactOS, the WMware network driver, or VMware itself.

Still, ReactOS is an interesting project, and even though I find it highly unlikely it will ever reach its stated goal, that what they have already achieved is mind-blowing.