PureMobile sent us in the Nokia 5800 XpressMusic for a review, the first Symbian OS smartphone with S60 5.0 in it to date. This impressive-looking smartphone looks like a darling touchscreen phone, but is it really? Read on for more.

The box it arrived with had a few nice goodies in it: a hard case with a wrist-wrap hole (case is not belt-compatible though), 3.5mm headphones with detachable remote control, a second stylus, a table stand (so you can watch videos in widescreen mode without having to hold the device), a wrist-wrap, the Li-Ion 1320 mAh battery, a microUSB cable, a charging cable, an 8 GB microSDHC card, and component video-out cables. 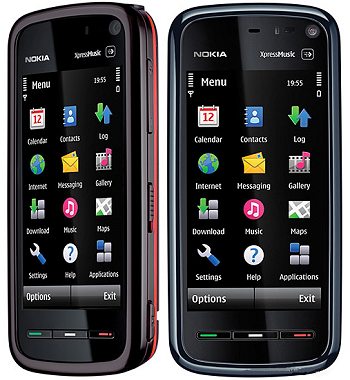 The device weighs just 109 gr, and it feels really nice in the palm of the hand. It is less wide than the iPhone or the HTC G1, but around the same height. On the left of the device you will find the SIM and microSDHC slots, on the top the microUSB slot, 3.5mm audio jack, power jack, and on/off button. On the right side there are the volume up/down buttons, the keys lock/unlock slider, and the camera shutter button. On the back side, you will find the stylus securely placed, and the camera. On the front side there’s the speaker, the video-call camera, accept/hangup buttons along with an “open menu” button, and one touch-sensitive “button” that loads a special (and pretty redundant in my opinion) multimedia menu (loads “share online”, videos, music, pictures etc).

The front screen of Symbian S60 5.0 looks a lot like like the previous S60 3.1 screens. If you are wondering where’s S60 4.0, well, it doesn’t exist, because the number 4 is considered bad luck in China, a major market for Nokia. You will find a very nice contacts application, VoIP support, good bluetooth usability with A2DP support, enough theme support, an updated version of their KHTML browser, the usual Nokia Maps GPS app, a powerful email client etc. I won’t go into much description of the software, because it’s basically S60 3.x (which it has been reviewed to death here on OSNews and elsewhere) plus touchscreen ability. I will mention some of the few new things in it though.

There are four ways to input characters in a given S60 5.0 screen: via a floating, mini virtual keyboard, a T9 alphanumeric keyboard, a full screen keyboard (in a rotated screen), or via handwriting recognition (which I found it to be accurate, but slower than just typing). Each time a button, icon, or character is pressed, the phone is slightly vibrating to provide user feedback. The mini virtual keyboard is only usable with a stylus, but the fullscreen keyboard can be used with the thumbs. Unfortunately, it’s not very easy to use, because while it’s supposed to be a thumb-board, it only works well if you use the tip of your fingernail — like a stylus. And even then, it’s not fool proof, it’s very easy to make mistakes, and Nokia does not auto-correct as well as the Apple iPhone does. More over, while there is an extensive support for accented northern European characters, there is no support for Greek in this (Asian) model.

After having used this phone for 2 weeks now, the UI feels a lot like this: “take a non-touchscreen UI, add a touchscreen LCD, profit”. While responsive, there is very little to none optimization to be used with thumbs/fingers, and flow organically from one menu to another. Instead, we get pop-up menus that open by soft-buttons, just like on the non-touchscreen phones! Trying to use that phone without a stylus was near impossible. Scrolling a long list for example, was a nightmare because my finger nail had to aim for a very thin scrollbar line! On top of that, there is no multi-touch support (one of the reasons why I still prefer the iPhone over Android too). I hope that Nokia should at least give for free a screen protector, because most of us will have to use our nails to get the job done. Making it pretty difficult removing the stylus (it requires quite some strength removing it from its slot), will only make more people wanna use the phone with their nails. Overall, the UI did not feel like a modern Palm/Apple/Android kind of organic UI. It felt like a rehashed soft-button dated UI, with lots of added MSG and salt so we don’t taste its age. 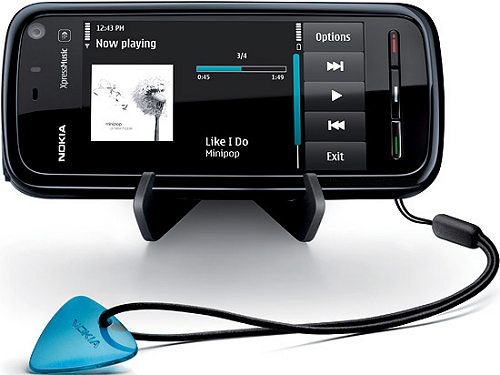 The usability of the new version of the browser is a mixed bag. From one side it’s obvious that they tried to make it easier to navigate around pages, but on the other hand, sites like my-symbian.com were extremely slow to scroll around. The phone also was mistaking my efforts to scroll around as clicks — very annoying. I ended up using Opera Mini at the end.

The biggest problem though, is the software compatibility with older applications. Regarding Java apps, the phone ships with a virtual T9 keyboard and controls, so you can use non-touchscreen-aware J2ME apps with it. Unfortunately, except Opera Mini, Google Maps, Gmail and 1-2 more apps, there are no useful J2ME apps out there to speak about (only games). So for native C++ apps, this is the 5th time Nokia does the same mistake and breaks compatibility. Twice with S60, and three times with their N-series Linux internet tablets. They seem to never learn from their mistakes, which is why after 3 years, their S60 3.x platform still has only 600 applications, while the iPhone has thousands in less than a year time, and Android is also in the hundreds (if not a thousand) within a few months too. This whole “oh, it’s hard keeping compatibility” mentality their engineers and managers have, has cost Nokia respect over the years from software houses who now snob the S60 platform, EVEN if it’s the best selling smartphone platform worldwide! No serious developer wants to put up with their constant breakups anymore! Nokia just doesn’t get it that compatibility matters more than their stupid and useless new online song-buying shop. They have this mentality that the non-smartphone manufacturers usually have, that adding superficial features on their phone actually sells. And they go at it, without planning ahead and having a more generic idea of what’s gonna happen 2 or 3 years down the road when Apple, or Google, or whoever else, creates a strong platform with a real future and application base, rather than a freaking toy after another freaking toy. The age of the cellphone being just a gadget, has long passed. People want to do real work with them now, and Nokia cuts us short with their non-existent third party application market. So far, three months after the release of this phone, there are only about 65 third party native apps that work with the 5800 model.

Ok, ok… I will breathe now.

Don’t get me wrong, there are some good things in this phone. The autofocus camera is pretty good, it has enough options (coloring, night mode, exposure, white balance, contrast, sharpness, grid, self-timer, etc). The wide VGA video support quality is pretty good as well (no support for recording via the video-call’s camera though). Speaking of video, the phone has the ability to playback MPEG4-SP, 3GP, h.264 and WMV. The music application is nothing great to speak about, but it works well, and if I may say so, it’s superior to Google’s Android music app. Compared to the iPhone’s though, it doesn’t even rank.

Call quality was top notch, and the TV-out ability was cool too. Audio quality via the headphones was very crisp, without buzzing or other such knuckling problems. The TFT screen was amazingly clear. The best thing about this phone though, is its battery life. The reason why it took me a while to write this review is because I was waiting for its battery to die so I can measure its lifespan. After almost two weeks of normal to low usage, I still have 15% of the battery left! It’s amazing what some handsets can do these days regarding battery life!

Overall, this is a nice multimedia-focused smartphone, but it doesn’t hold a handle to the iPhone. Sure it has a bit better battery life, higher resolution screen (although much smaller screen size), better camera, VoIP SIP, and more Bluetooth profile support than the iPhone, but when you compare the overall usability and user experience you get out of the two, the 5800 doesn’t cut it in the least. Nokia needs to be more serious about software if they want to have a future in this rapidly ever-changing smartphone future. Being a great hardware manufacturer is one thing, but it’s not the only thing that matters anymore. The market has changed, and (my) expectations have changed too.