Conventional wisdom has it that Mosaic was the first graphical web browser. Even though Mosaic – the basis for Netscape – certainly kickstarted the web revolution, it wasn’t the first graphical web browser at all – that honour goes to Erwise, developed by four Finnish college students in 1991. It was more advanced than Mosaic, ran on the X Window System, but didn’t catch on in the end. The four developers recently gave an interview detailing Erwise and its history.

Kim Nyberg, Kari SydÃ¤nmaanlakka, Teemu Rantanen, and Kati Borgers were the four college students who developed the first graphical point-and-click web browser in Helsinki, Finland, in 1991, and completed it in April 1992. It had all sorts of abilities that Mosaic, released a year later, did not have, such as word search on webpages. This search system was interesting because if it couldn’t find a word on the currently displayed webpage, it would trail the internet to find it in other pages – 12 at the time. More impressive was Erwise’s ability to load multiple pages at the same time; you could click on a hyperlink and another window would open the linked page. 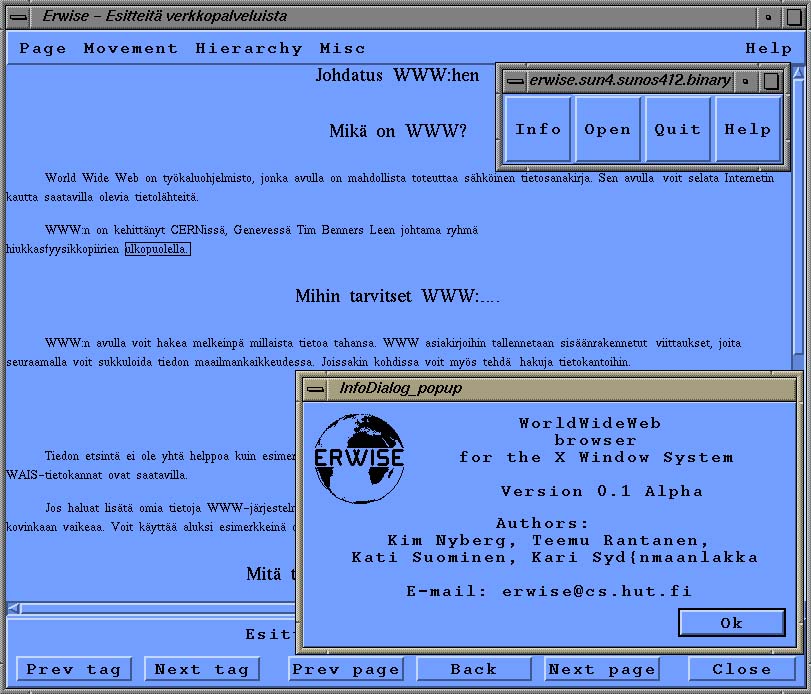 How did a few Fins come up with the idea to code a graphical web browser? Tim Beners-Lee realised that a graphical browser would make the web much easier to use, and figured it would be a good project for students. He placed several requests around the world, and Ari Lemmke, the instructor of the four students, picked it up, and suggested the four started working on it “or something Linux-related”. The group opted for the browser project.

Several other projects followed Erwise, and of course Mosaic was the one that would eventually become the mother of all graphical web browsers. “At first they did a lot of things quite wrong with Mosaic. There were problems we had already solved,” Nyberg laughs. Nyberg would even send an email with some advice to the people behind Mosaic.

This raises the question: why didn’t Erwise become the mother of all web browsers? The problem was that at the time, Finland was in a deep economic depression, the country was bankrupt, and venture capital was non-existent – venture capital that was abundant in Silicon Valley, where Mosaic would attract more than enough of it to kickstart the web revolution.

We could not have created a business around Erwise in Finland then. The only way we could have made money would have been to continue our developing it so that Netscape might have finally bought us. Still, the big thing is, we could have reached the initial Mosaic level with relatively small extra work. We should have just finalized Erwise and published it on several platforms.

Rantanen wanted to get a job to do just that, but there wasn’t even enough money to do that.

This just goes to show that great and innovative ideas get lost because there is no money. Not too long ago I saw a story on Dutch TV about a Dutch 16-year old girl who has devoted her life to become a world-class figure skater. She receives all the support from her family, who devote all their cash to her dream, and because that family happens to be wealthy enough, she gets the opportunity to achieve her dream

While I obviously hope she gets where she wants to go, it did make me wonder just how much talent and how many good ideas are wasted because there is no rich family, no investors, no good ol’ luck.