Version 8 comes a year after their version 7 release, although in reality only 6 releases exist (the version numbering jumped from v4 to v7 last year). The package sells for about $100 USD at retailers, and it’s also compatible with Windows 7.

This new version has a new sync feature that allows you to view pictures and videos on all your PCs at home, automatically. The Organizer now comes with a Fullscreen view, that helps the overall enjoyment of your playback clips, while the auto-analyzer adds “interest points” to your clips based on how much you worked on them, and on their visual quality. 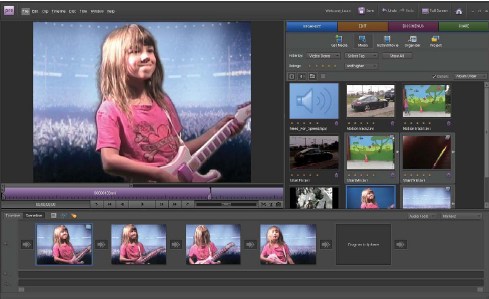 The biggest new features include the “smart” decisions that PE8 takes on your footage automatically. SmartFix fixes the shakiness of your footage, lighting, and color. SmartTrim automatically cuts out the uninteresting parts of the video (based on some analysis algorithm), and the SmartMix makes sure that your music doesn’t overpower the clip’s main audio.

Another major feature is motion tracking. You can now add text or graphics on your video, and have them set to move automatically on the screen depending how your main subject moves. To help you do that, there’s now a big library of animations, objects, graphics to choose from.

There are also new effects, like motion blur, and a cartoon effect, and a number of new transitions.

Overall, Premiere Elements 8 proved stable, and pretty fast (although it takes a while to install, and load each time). It requires at least 2 GB of RAM for HD editing, but that’s to be expected. 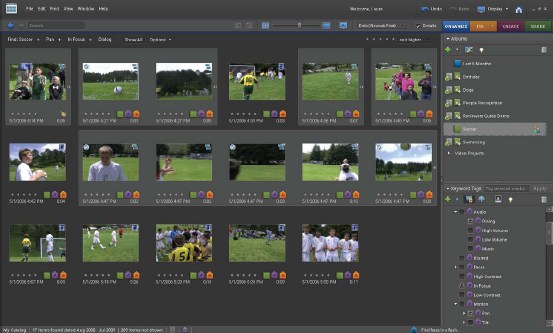 However, there is not a lot flexibility regarding the project properties in a way that doesn’t feel canned and pre-determined by the software. While this software is meant for consumers, we should not forget that there are video users who do need the power, but don’t have the thousands of dollars to buy Premiere Pro.

Given that Sony now sells their Vegas Movie Studio HD for $40, and their Platinum edition for $80 (a version that’s much more flexible than Premiere Elements), it really begs the question if Adobe can keep up such dumbed down software for much longer and charge so much for it.

Nevertheless, if you don’t need the flexibility (or 24p support), Premiere Elements 8 will do the job.