Home > Multimedia, AV > A Look at the Roku XD|S

My husband stopped trusting me with his PS3 after I burned three Netflix PS3 software disks (a known problem), so he asked me to get my Netflix kick with another device (that was before the disk-less PS3 solution). So I bought the $99 Roku XD|S, the highest Roku model, a Linux-based video streaming TV device.

The Roku XD|S is a pretty small device, about 1/2 the size of the older AppleTV, and about 2x the size of the new AppleTV. Connecting the device is very easy, but you will need an extra HDMI cable (it only comes with composite cables). I connected the device via Ethernet, since my WiFi at home is flaky because of wireless over-crowding.

The boot procedure takes about 1 minute. Upon its first boot, it asked me to activate the Roku player with the Roku web site, so you will need a computer next to you the first time. Then, you can set the resolution of your TV (up to 1080p), the audio mode you would like to use (supports 5.1 Surround). The Roku never turns off (it has a semi-standby mode), so when you don’t use it, it will display a screen saver in that TV Input. Roku says that the device uses 6 watts in peak, and 4 watts in standby mode. The device doesn’t get hot — definitely way less hot than our first generation AppleTV, or our Comcast DVR.

Its remote control is very clean in terms of design, very few buttons comparatively to remotes of devices. Roku’s interface is very nice and clean, easy to navigate through, usually via “scrolling cards”. These cards, are called “channels” in Roku speak, and are equivalent to applications. Roku has a developer program, so various services can add their own channel.

Some of these channels are available for browsing before adding them to your collection, some others are “private” channels and you need to know a special code in order to activate them. This was the case for the third party-created YouTube channel (code: B8VVK, HD works automatically only when your connection to Youtube’s servers is good), but also for the Roku-created “USB Media Browser”. My Roku XD|S came with a USB port, and it has a powerful decoding DSP in it, so it was a surprise that you can’t do anything with that USB port unless you first activate a channel that doesn’t appear in any listing, but you need to know a secret code for (code: HMKLI).

The main attraction of Roku is Netflix. It’s its selling point, but I foresee its appeal shrinking, as every new serious device has support for Netflix as of late. Anyways, Netflix works well in HD, but its interface is not as nice/fast-to-use as the new UI on the PS3. Hopefully there’s an update coming!

I guess the second biggest feature of Roku is Hulu Plus. Roku is the only TV device apart the PS3 that’s scheduled to get Hulu Plus so far. That channel is not working yet, as Hulu is still busy blocking Google TV and other devices from accessing its web site. There is also Amazon HD On Demand, to counter iTunes’ renting/buying service, which I haven’t tried it as of yet (soon).

Other channels include the on-demand music service MOG (7 day trial, $5-$10 per month after that), Flixster with HD trailers (the app doesn’t always want to stream, and in one case it rebooted Roku), TuneIn Radio with many radio station options, FlickR/Picasa photo viewer, MediaFly for A/V podcasts (I love the TED talks personally), and the popular Pandora radio.

The USB media browser can read FAT32 USB disks/cards. While the DSP of the particular model has hardware support for many formats, Roku has only implemented support for .MP4 h.264/AAC files, up to 1080/30p (I successfully was able to smoothly playback a 12-16 VBR mbps 1080/24p file). No other formats or video containers work. Some users suggest that you should make sure you export your 30p videos at exactly 29.97 fps, or there might be long times of buffering. During playback, fast forwarding was really fast, and as expected. 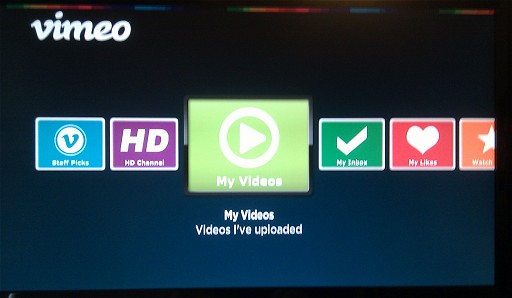 My favorite part of Roku is none of the above though. Truth is, every Roku service can be found in one form or another in other TV devices as well. But Roku does something that no other can: Vimeo. Vimeo works on Roku really nicely, in full HD: it let’s you search, view your own videos, the official Staff Picks and HD Channels, view your “likes” videos, your “watch later” queue, and a good chunk of your subscription videos (but not all). Vimeo has become the premiere service of independent filmmakers and enthusiasts videographers who publish quality video work — in contrast to the chaotic YouTube. Having Vimeo on your TV, is a blessing for all of us who like to view art.

I hope for an RDIO client though instead of MOG (since I’d want to use that account with my Android phone too, and I find MOG too crashy on Android). Also, I’d love a nicely designed weekly Weather forecast channel, and a Google Reader channel that can read plain text (I’m not even asking for a full HTML parser of the RSS feeds). Hopefully, work will start at Roku for a UPnP client too, and support for more video formats.

Overall, I’d say that I really like Roku. It’s going to be my main entertainment device via Netflix and the upcoming Hulu Plus (especially since I’m planning on canceling our Comcast TV service). And its Vimeo support is the cherry on top of the cake.

FTC 16 CFR Part 255 Disclaimer
I bought this item by myself, and Roku or any other company had no influence or involvement in the article’s findings and opinions.