Hi-Mobile.net was very generous to send us over the second most high-end Nokia S40-based phone (after the 7390) for a review, the 6288. This model is an updated version over its similarly-looking 6280, and it’s considered a high-end feature phone. Read more for our findings and plenty of screenshots.

The 6288 is a tri-band GSM slider cellphone with 3G UMTS and EDGE support. It comes with a 2.2″ QVGA bright screen, a miniSD slot, 4.5 MB of internal storage, Bluetooth 2.0, IrDA, 2 MP camera with flashlight, VGA video-call camera, FM Radio and PTT. Its 3G functionality, along its front VGA camera and PTT can only be used in Europe (Cingular uses a different kind of PTT in US). In the box we found all its manuals and CDs, a 64 MB miniSD card, a pop-port stereo handsfree, a USB cable and a power adapter. 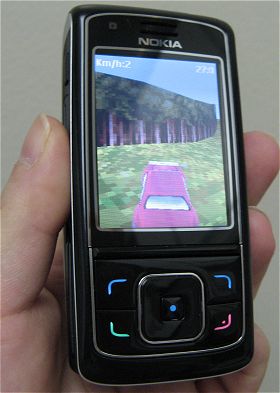 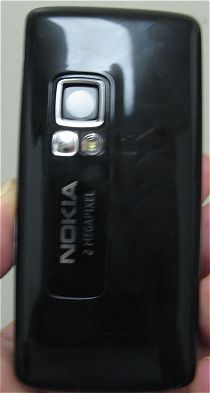 The first impression of the phone is that it is a bit bulky (thick), although it’s width and height are completely normal. The sliding mechanism works very well, it is really easy sliding the phone up and down without much effort. When exposed, the numeric keypad feels very solid and it’s very easy to type with it. On the right side of the phone you will find the miniSD slot, the speaker and the PTT button. This button can not be re-assigned for another action. On the right side, there is the Vol+/Vol- rocker button and the Camera button. At the bottom of the device you will find the pop-opt port (handsfree, USB) and the power port (same as in the E61 and N800). On the top of the device there is IrDA and the On/Off button that also brings up the profiles menu. Profiles supported are: General, Outdoors, meeting, Flight mode, Silent and two user modes.

What will strike you when using this phone is its larger-than-usual QVGA screen. Other phones in its class usually ship with 1.8″ or 2.0″ screens but the 6288 uses a bright, clear, 2.2″ 256k color TFT screen. The screen is never really off because even when the backlight is off, you can still see the actual screen being turned on — this allows you to read the date/time without having to turn ON the screen when you are directly under the sun. Unfortunately though, there is no option to set the actual default backlight strength so when the screen is ON, it’s always full-powered.

The 6288 boots in about 6-7 seconds and it’s overall very fast to carry out the various actions. We also found its software very reliable and stable. In the main screen you can enable the “Active Standby” mode which is the poor man’s “Today” screen as found in PocketPCs or S60 phones. There, you can view alarms, notes, currently played songs, currently tuned FM station and a bar of 5 application shortcuts. A few more “plugins” exist and the system allows you to swap them with the plugins mentioned above. You can navigate to the Active Standby screen by pressing the “up” joypad key, while when pressing the middle “ok” key you will find yourself in the main menu of the phone, a 3×4 grid with 10 icons in it. 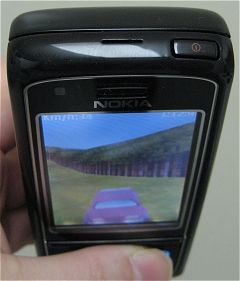 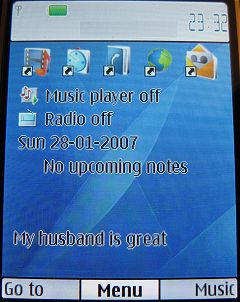 The music player can playback mp3, eAAC+ and AAC, but not WMA. The S40 devices have a “premium” music application that supports playlists and sorting via various ways (found in the 7390 and 5300/5200 models), but the 6288 comes with the basic music player. All songs are sorted by filename and they are played one after another. You can do previous/next and fast forward and change the equalizer to 6-7 presets, but that’s about it. However, the phone supports A2DP and so you can use a stereo wireless headset. More over, the handsfree that comes with the phone is top notch. Good build quality, good sound quality, 3 buttons, but most importantly, this is the only earphones that actually… fit in my ears! All others I have ever tried just fall off. 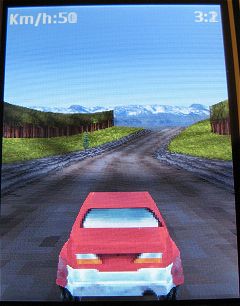 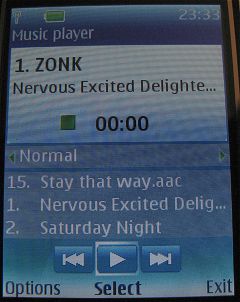 The visual FM radio is stereo and it allows the user to select via a number of presets. Sound quality is good and reception is acceptable too. Usability could have been a bit better though (I find Motorola’s ROKR E2 FM Radio application easier to use). 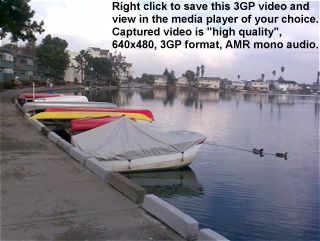 The video player is a very basic one and does not support fast-forwarding. It can go full screen, but unfortunately the softkeys just stay ON and so the middle softkey renders exactly on top of the picture. Had they put one of the two softkey options in the left softkey instead of the “ok” button in the middle of the screen, it would have been more acceptable. Other than that, the phone can playback 3GP and MP4 video, up to QVGA resolution without dropping any frames (faster playback than any Motorola Linux phone, even if the 6288 uses a much slower CPU).

One thing I love about Nokia is their wicked Java implementation on both their S40 and S60 phones. Their J2ME has hooks for Bluetooth, GPS and the camera (so you can use Opera Mini’s photo blog ability — the 6288 captures at 120×160 pixels). More over, this particular phone comes with great 3D support. I tried all three 3D games that come with the phone (car racing, golf and Snake) and what do you know! The games look fabulous and render very fast. There is no comparison with Motorola’s Java3D implementation on their Linux phones, Nokia’s is far better and faster. 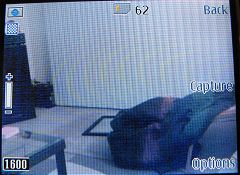 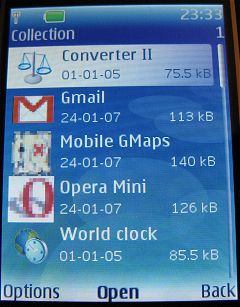 Speaking about Java, Gmail, Opera Mini and GMaps worked perfectly (and loaded really fast), but Google Maps didn’t. The S40 3rd Edition phones use the middle “ok” button as their default softkey instead of the softkey on the left, and so when you try to select a menu item in the Google Maps application, a new menu pops up rather than carrying out the action. I have seen this Google Maps bug in the LG U8500 phone too and it seems that the 6288 is also one of the phones affected by it. Hopefully Google will fix the bug, I have reported it here. 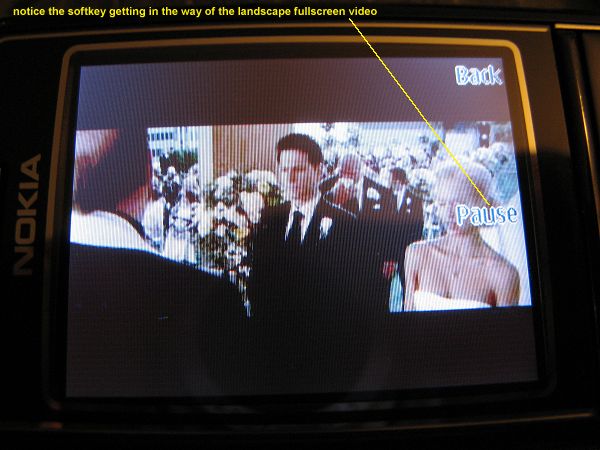 The 2MP camera in the 6288 is very so-so compared to, let’s say, the Sony Ericsson’s also 2MP cameraphone W810i. Only the 2MP camera can be used for capturing, as the VGA video call camera is only enabled for video-calls. It is easy to use the camera, there is an 8x digital zoom support and a number of effects, flashlight and night mode, but I think what really sets this phone apart is its ability to capture video at 640×480. Unfortunately, you can’t capture MP4 video (which usually captures better audio quality than 3GP).

I loved the Bluetooth implementation in the 6288. It never let me down as it was very fast, usually transferring files at around 90 KB/sec. The IrDA OBEX file exchange worked fine too. Also, the reception is acceptable and call sound quality very good. The device supports speakerphone functionality, call waiting, call hold, call divert, call timer and conference calls. Battery life is ok too, averaging about 4 hours of talk time and about 10 days of standby. EDGE-based web browsing and downloading yielded speeds up to 6-7 KB/sec here.

Of course, the phone has a few areas where it could have been better. It comes with only 4.5 MBs of free space and the fact that you can use a miniSD does not help you if you want to download or receive via Bluetooth a file that’s bigger or around that size (e.g. an mp3 file). The transfer will just stop, as the phone doesn’t let you specify if you want to save in the card or in the internal memory. Other areas where the phone could be better is in its default theme which I found repulsive in terms of usability, the Active Standby screen where the font is almost unreadable, the “Gallery” where the file manager actions require too many clicks and recognized filetypes arriving via IrDA/BT are not saved automatically in the right folder, the web browser window which does not make usage of the available screen space (there is an unused bar at the bottom of each web page) and the fact that creating IM/GPRS/PTT/email/etc accounts is not as straight forward as it should be (are global “configurations” and you can have different sets of them).

In conclusion, we highly recommend the Nokia 6288 to all GSM users who don’t require a smartphone or anything more than a good feature phone. This phone can surely please users who want a high megapixel camera, high resolution display and all the basic functions that work fast, accurately and solidly. It’s one of the best feature phones available today, beat to the punch only from some higher-end smartphones.