Geeks.com were once more very kind to send us one of their products for a review. Geeks sells cheap laptops –among others– and so we asked for a low-cost laptop without an operating system in it for the purpose of this review. They sent us the IBM T23, (currently selling for just $299) and an extra 256 MB stick of RAM ($30). We tested the laptop with three different OSes, read on for more. 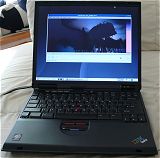 The refurbished laptop came well-packed and in very good condition. We found no blemishes or cuts in the body of the laptop. In the box we found just a power charger. Installing the extra memory (SDRAM – non-ECC – 133 MHz) was exceptionally easy and so we overall then had 512 MBs of RAM. The laptop uses a PIII-M CPU at 1.13 Ghz, a 30 GB drive, a DVD-ROM, an S3 SuperSavage IX dual-head graphics card, 2 USB ports, ethernet, 56k modem, 2 PCMCIA ports, line in/out, mic-in, 14.1″ 1024×768 TFT screen, serial & parallel ports, S-Video out, PS/2 port. The laptop weighs 5.3 lbs overall: it’s pretty portable and it feels rigid.

The first thing you are going to like about this laptop is its keyboard. It gives you good tactile feedback and it’s soft, but without being “mushy”. This is definitely one of the best keyboards I have ever typed on. The first thing that you might dislike though, is the fact that this laptop does not feature a touchpad, but instead a “touch stick”. It will take a few hours to get used to it if you had never used an IBM laptop before.

The first operating system we tried on it was Ubuntu Feisty, the latest beta. Installation went perfectly fine. At first, it seems that the laptop works great with Feisty: ethernet, graphics, drive etc, but if you use it for a bit more time you will find a few bugs, mostly having to do with the Savage driver. I have made a number of bug reports at Ubuntu’s bugzilla since I tried the OS on this laptop. Most important bugs are the occasional crash of the ethernet after a suspend-to-RAM wake up (same bug happen on other laptops too), USB does not wake up at all after suspend-to-RAM (seems to be a recent 2.6.20 kernel bug) and 4-5 more S3 Savage driver bugs.

I have no doubt in my mind that the USB and ethernet bugs will be eventually fixed (there is a possibility that these are Ubuntu Feisty-specific bugs rather than generic Linux bugs), but I believe that the Savage bugs won’t get fixed because there is no active maintainer for the driver in the Xorg project anymore. Moreover, the Lucent winmodem in the laptop does not have a stable driver that I can trust (closed or open source) for the 2.6.x kernel. I also tried the VESA driver which actually worked flawlessly compared to the Savage driver (minus the lack of Xv and 3D support for course), but the real problem is that when using the VESA driver the laptop refuses to go to sleep (Gnome-power-manager will just blank the screen instead of going to sleep when closing the lid while VESA is used instead of a real accelerated driver).

Overall, while I was unhappy with the kind of compatibility I got from Ubuntu Linux on this laptop (2 suspend bugs and 4 savage ones), I must say that the laptop performed really well: it booted Ubuntu in 55 seconds and the OS didn’t seem to consume more than 180 MBs of RAM most of the time. The laptop was spiffy and never once I felt that was lagging in CPU power. In fact, the laptop played back 480p HD video without dropping a single frame. It managed up to 510 fps in glxgears which is not too bad at all considering the state of the 3D savage driver. Games like the 3D game “Neverball” worked really fast.

The next OS I tried was a copy of BeOS MAX. Again, everything worked admirably well (BeOS was extremely fast on this laptop), but the Savage driver support was sub-par. I had to use VESA again.

Finally, I tried Windows XP. This is where the laptop really worked 100%, flawlessly, including the savage driver. There were no suspension problems with XP. My husband uses almost the same laptop daily in his workplace and he agrees that Windows XP for years now has performed admirably on the T23.

Geeks.com sell a lot more laptops at good prices, we highly suggest looking at getting one that comes with an Intel graphics card (we tried to get one of these for a review originally as we knew they were more compatible than a Savage-based one but the price was a bit over our limit). The Intel card is very well supported by Xorg, even better than Nvidia or ATi cards — albeit not as powerful. Have a look at Geeks’ catalog and find a refurbished laptop at a low price that suits your needs, especially something like this IBM R40.

UPDATE July 2008: Ubuntu Hardy 8.04 works perfectly with the laptop, all bugs are fixed. More over, the Lucent winmodem works easily with the “-full” “martian” driver: compile and install as per instructions the driver and then do a “modprobe martian_dev” and then a “martian_modem –daemon –mode 0666”. You can then put these two commands on your /etc/rc.local to get the modem started on each reboot. If you upgrade your kernel you will have to recompile the driver.

Cons:
* After Ubuntu fixing their bugs, not much