PureMobile sent us in for a review one of Nokia’s newest and most powerful handsets: the E90. The E90 is a Communicator-class device and very popular among businessmen, but also among system administrators too (one of our friends, sysadmin at Google, is using Nokia’s qwerty/wifi devices specifically for SSH access). Read on for our review of the impressive E90.The Nokia E90 is a quad-band GSM & 2100 Mhz HSDPA device. It has two 16mil color TFT screens, one QVGA external and one 800×352 internal landscape. It has 128 MB of internal flash, 128 MB RAM, a microSD hotswap port, and it runs on 330 Mhz ARM CPU. It comes with Wi-Fi 802.11b/g, Bluetooth 2.0 with A2DP support and an IrDA port. It uses the Nokia connector for charging, but for data exchange it’s using a standard miniUSB 2.0 port. It also comes with a 2.5mm headphone jack, full GPS support, Push to talk for usage outside of USA, FM radio, a 3.2 MP camera with autofocus, and a secondary QCIF video-call camera. The smartphone weighs 210 grams, although it doesn’t feel too big because of its ultra-wide design. In the box we found the handset, a battery, a 512 MB microSD card, a charger, a beautiful belt case, a stereo headset and the appropriate CDs/manuals. 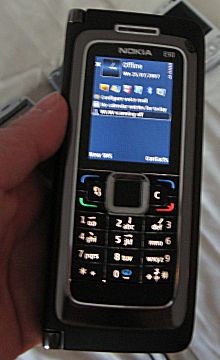 The E90 is running Symbian OS v9.2, S60 rel. 3.1 and the phone came by default with the latest available firmware. Nokia usually provides up to 2 years of firmware support for their business-oriented Communicators (and up to 1 year for their popular consumer models), so we are sure that we will see a number of firmware upgrades in the future that not only fix bugs but also add small new features. 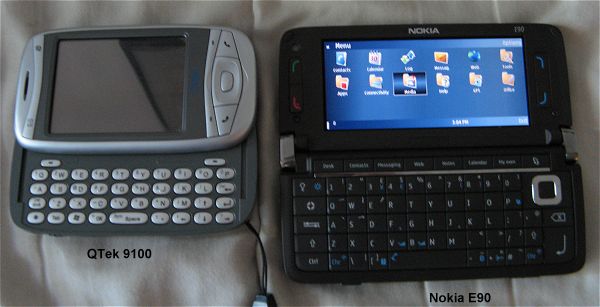 The smartphone is very well-built and it has an impressive stature. We tested its wireless capabilities and we were impressed by the good voice quality, fast WiFi and ultra-speedy Bluetooth file exchange. The A2DP feature worked well with 3 out of 4 Bluetooth headsets we tried it with. Regarding GPS, we had trouble locking on to a satellite, just like we had with an earlier firmware version of the N95. Since then Nokia added AGPS assistance to their GPS hardware module, resulting in faster satellite lock-in. We hope to see this new feature on the E90 soon too after a firmware upgrade.

When using the E90 with its external screen, the usability of the handset is pretty much the same as with all other S60 3.1 devices. Good quality keypad, standard buttons, and a standard set of software applications plus some business-specific ones like Office suite, Blackberry connectivity etc. But when you open the communicator to reveal the big qwerty keyboard and big screen, the interface changes a bit with the soft-buttons getting on the side rather than below the screen. We had to constantly change the location of our fingers up and down in order to cater to both typing and using the soft-buttons. Especially for Java applications (e.g. Opera Mini) this is a problem because the soft-buttons don’t change orientation. I believe that a better design would have been having a somewhat “wider” but “less long” body with an 800×480 resolution and the soft-buttons above the hardware keyboard. Especially for my small hands it would make it easier to type as currently the device is a tad too long to position my hands correctly on it. Nevertheless, keyboard quality is very good and it gives you great tactile feedback. You could potentially type very fast on it.

Regarding the multimedia capabilities of the phone I found the h.264/mp4 support very pleasing, especially on the wide screen. The camera quality is above average, although the application that controls has a bit of a learning curve in it. The external camera can grab VGA video which is pretty impressive. The video-call camera can only be used for calls, and it won’t let you grab any pictures or video from it, which is a bit disappointing because I could even see some business usage on this. FM Radio quality was top notch (requires headphones in order to use that as an antenna), while the updated music application has better usability and features than the version found on most S60 3.0 devices.

Our favorite feature on the E90 was again its VoIP functionality. Using GizmoProject, we called to Greece and in mainland USA, and we never had any problem with it. For VoIP alone, it’s a good reason to get a WiFi-enabled Nokia smartphone. The other reason is of course native applications. There are currently about 300 native apps for S60 3.x, and the ones we tried worked great with both the small and big screens, except Opera Mobile, which will probably need to be updated. Opera Mini had some trouble with the large screen too, it would not figure out that it was running on a 800-wide screen and lots of pages had menu text rendering on top of each other (a problem not occurring on smaller screens). Nevertheless, the built-in WebKit browser does the job well, and it now has support for WAP pages too (the original S60 3.0 version didn’t).

Regarding battery life we managed 4.5 hours of talk time and well-over a week on stand-by with normal usage. In fact, because we are based in USA we turned off HSDPA support, and so battery standby life took an extra kick!

Overall, we can’t recommend enough this handset. It has great software and almost perfect hardware design. Sure, it comes at a higher price, but business users will probably recognize the value it brings to their everyday work and opt for it.