Geeks.com sent us in one of their consumer electronics, the Linux-based Archos 604 PMP for a whirl, and we surely gave it one. This 30 GB PMP is the fourth generation video product from Archos, one of the biggest names in that market.The Archos 604 comes with 30 GBs of storage and a 4.3″ 480×272 32bit screen. On the box we found some earbud headphones, a rechargeable Li-ion battery, a dedicated USB 2.0 charging cable, a DVR Station adapter (DVR Station sold separately), a nice carry case and a Quick Start Guide. There are no software CDs coming with Archos, as it connects as an external USB drive to the computer, and then the user can just drag n drop files to the appropriate folders already found there. Our device came with the latest firmware version in it.

On the top of the device you will find the power button and the TV/LCD switch button that also couples as a button lock. There is a mono speaker on the front of the device and a kickstand on the back of it. On the left side there are 4 indicator LEDs, and on the right side, there’s the 3.5mm A/V jack, while on the bottom you will find the DVR port, and the charging and data port. The charging/data port on the 604 is not a standard USB port. Speaking about charging, the USB cable is the only way to charge the device, and in fact, if you decide to buy the wall charger, you are forced to buy the DVR Station too with it. I was thinking of getting the Archos with me on our vacations soon, but the lack of a wall charger is prohibiting. Even if I was to get a laptop with me to charge the Archos, it takes a good 5 hours to charge via USB. Regarding battery life, I could not get the claimed 5 hours of video playback. Instead, I got a good 3 hours — although this might be unit-specific. 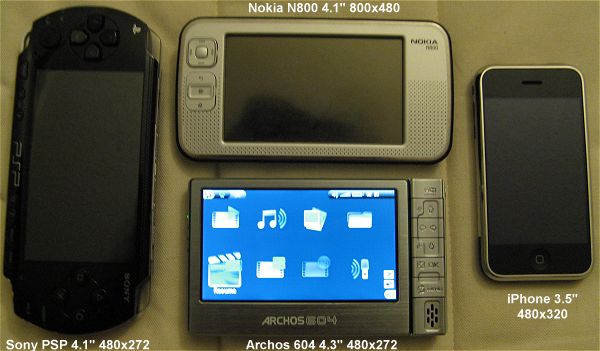 All the user interface usage is done via the button panel on the right side of the device. All 5 buttons are “rocker” buttons, so depending if you are pressing them towards their left or their right side, they will carry out a different action (so in reality, they are 10 buttons). Depending in which application you are each time, the buttons will do a different thing, and this was a bit confusing. For example, you press “menu” to open the menu while playing back a video, and you can press “X” to discard that menu. If you press the “reload” button next to the “menu” button, a full screen status screen will open. But if you press “X” on that screen, you are thrown out of the video playback, instead of just taking away that screen. I personally find the interface experience much more inferior to the iPod’s, or the Zune’s, although it’s better than on some cheap Asian PMPs that are sold in the market today. The OS loads in about 10 seconds and it is pretty snappy.

Where Archos shines compared to any similar product out there today is video codec support. This is the first PMP that I have reviewed that was able to playback any DivX/XDiV file, and without a hitch. The Archos people also sent us the h.264 and mpeg/mpeg2 plugins for the purpose of this review (sold separately as addons, $20 each), and with these plugins Archos played back all such files we threw at it. Archos also played back normal mpeg-4 files, like the ones cellphones usually record. WMV9/ASF worked too, although it was not able to fast forward on these kinds files (or set “bookmarks”). The only files we tried but the device was not able to playback was WMV8, 3GP and the old kind of .mov files that Apple used to encode with Quicktime back in 2002. The point is though, as long as the resolution of the file is up to 720×576, the Archos 604 is able to playback without dropping frames 95% of the user-oriented formats out there, and that’s quite an accomplishment.

The device has a number of menu options during playback, like back/fast forward, 30-second fast/back forward, information screens, speed of playback, save screenshot from frozen frame, save bookmark (on supported file formats only), bass boost, audio balance, screen brightness, audio output choice, volume and more. My favorite setting is the screen playback mode: original size, maximized (the picture zooms in to fill up the 16:9 screen), and fullscreen, which both zooms in and crops. The “fullscreen” mode is a very interesting one because it’s the most “fair” way of viewing a 4:3 footage on a 16:9 screen without distorting too much or throwing too much of the corners away. SHARP is the only TV manufacturer that has this feature as far as I know, they call it “smart stretch” and it’s their default mode for non-HD TV channels.

Now, regarding audio (wma, aac, mp3, ac3, wav) and pictures (jpg, bmp, png), there are the usual features to be found there, nothing special: shuffle, repeat, slideshows, etc. The Archos is able to use album art too, but I haven’t found a way to do just that. The picture viewing application is basic but impressive, but the audio one doesn’t hold a candle compared to the iPod. Other applications that are included with the device is a (very slow) PDF viewer, a file browser which I still haven’t figure out how to use it properly (it’s the most cumbersome application in the whole device), a TV scheduler which is useless without the DVR Station that’s sold extra, and some system settings: language, display (supports component, s-video, RGB and composite via the DVR Station addon), color themes, a clock setting application, battery and power off settings, and a TV control application that recognizes many TV tuners (again, I think this also requires the DVR Station as I haven’t noticed any infrared port on the Archos 604 itself).

In conclusion, I find the amazing video compatibility of the 604 its biggest feature, and the lack of a wall charger its biggest problem. But as long as you are willing to pay the extra $40 for the h.264/mpeg/mpeg2 codecs and you don’t mind the lack of a wall charger, this is a very worthy video device. Screen quality is good, and screen size is bigger than any other as-portable device out there and this makes the Archos 604 a good buy at $175. You may also consider the 80 GB version, or the 4:3 3.5″ screen version. There is also a WiFi version available, that uses the Opera web browser.