Probably the most often misunderstood element of KDE4 is Plasma, the extensive widget engine that replaces the normal desktop and the Kicker panel from KDE 3.x. The entire KDE4 desktop is built up out of Plasmoids (yet another term for desk accessory), including the panel and the desktop itself – and it is the latter that has been causing quite some confusion. Where are my desktop icons? Update: Aaron Seigo has published a screencast showing how the FolderView Plasmoid behaves as a normal desktop, and how to make it so.The answer is Plasma’s FolderView desk accessory, basically a glorified rectangle which can list the contents of any folder right on your desktop – including that of ~/desktop, allowing you to remain in your comfort zone of icons on your desktop. However, the fun doesn’t end here, as the KDE developers are coming up with a lot more fanciness for FolderView than just the listing of icons.

The idea centres around filters. The configuration dialog for a FolderView Plasmoid allows you to filter contents, so that it shows only the files that you want to see. KDE’er/Amarok’er Lydia Pintscher wrote down a blog entry to show these features off.

I have a ~/tmp folder where I throw in all the stuff that is, well, temporary. This stuff needs to be moved somewhere else and I was just too lazy to do it right away or is stuff I need to look at and that can be deleted afterwards. And there are also a few TODO files in there that need my attention. So Plasma to the rescue! I created a FolderView that shows the content of my tmp folder and (here comes the nifty) filters it to only show me the stuff I really care about. Which is files with TODO in the filename.

Using KDE’s KIO API, you can also show and filter contents of remote folders, but that’s not where the fun ends. Using KDE’s Nepomuk, things get a whole lot more interesting, as the following screenshot shows – remember, this is work-in-progress technology. 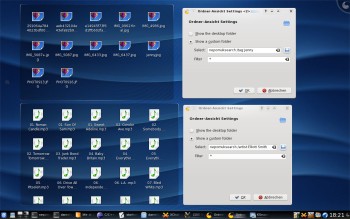 The FolderView Plasmoid allows people to have a standard, regular, and comfortable desktop, or a modern, more powerful one where multiple FolderView widgets show just the files you need at that moment. In the future, you could possibly have an adaptive FolderView instance, which uses Nepomuk to show files relevant to what you are doing with your computer at that time. Browsing Heather “Dooce” Armstrong’s weblog, and the FolderView widget would show you photos from that trip you made to Salt Lake City. Just a suggestion.

All that’s left to do now is rename Nepomuk to something that doesn’t sound like it would make children cry, and it’s all set.