Geeks.com, known for their cheap laptops, sent us the Acer Aspire One for a review. Thom wrote a review of the popular laptop recently, but here’s my take on it. Update: After this review went up, and within two hours, I installed Ubuntu 8.10 (time is 4:10 AM here, couldn’t sleep until I had Ubuntu in there). Using this very nice tutorial, I have everything up and running.

The Aspire One is a bit wider than the Eee PC 701 I reviewed a few weeks ago, and so it’s much easier to type on it. In fact, the keyboard has an excellent quality (in fact, my husband was just telling me that he prefers it over his Macbook Pro). And speaking of the Macbook Pro, the Acer Aspire One was exactly half the size when put on top of the 15″ Mac. 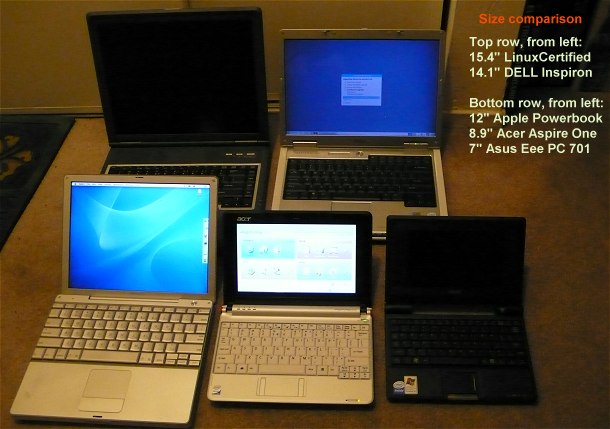 The build quality is very good, and screen quality too. The speaker is loud and clear, even the webcam is good enough for small clip recording.Overall, the size and weight is just right for a small netbook that you can easily carry with you everywhere. The battery life with the 3-cell default battery, is about 3 hours. Not bad for the weight. In sleep mode, it drains about 30% of battery per day. Regarding sleep, it works fine, but it takes quite some time to wake up — compared to my powerbook for example.

The speed of the CPU is really enough for the kind of work you would do with a netbook. The only heavy application I am interested personally is good 720p HD Flash performance on Vimeo.com, and this wasn’t a problem with the Atom. It in fact worked better than my P4 desktop, so what more could I ask for?

The touchpad layout is a bit of a problem not because the buttons are on the sides instead of below the touchpad, but because they are not wide enough, and so I keep pressing the plastic body instead of the actual buttons.

If you are using the netbook only for browsing 8 GBs are enough, but adding an SD card on the second SD slot will add the additional storage on the main storage total, so that’s a good way of upgrading without the need of screwdrivers. Speaking of upgrades, you can buy more RAM and somewhat easily (not very) add it to the Acer Aspire One. SSD or hard drive upgrades are much more complicated though and not recommended.

Hardware-wise, the only that’s really missing is internal Bluetooth. If this was year 2010, I would probably say that a 3G card would be a must too, but for now, it’s enough to say that Bluetooth is the only hardware feature that I missed from this laptop.

Now, regarding the software. I liked Linpus. Was simple and to the point, running atop some XFce libraries and apps. In fact, it loads in about 10-15 seconds which is madly fast. Its desktop has four major categorized icon teams where you can choose from, e.g. networking had Firefox, an Acer-developed email client, a licensed IM client, productivity had Open Office, Entertainment had some games, etc etc.

However, Linpus wasn’t as good as it should have been. I personally take offense having Acer writing or licensing applications that are not as good as the open source alternatives, e.g. Pidgin. I would have preferred to see Acer using the desktop version of Ubuntu by default, and putting all their resources to it, rather than to a cut down version of Linux with lots of wheel re-invention. The reason for this is that while I found 99% of what I needed on this distribution, something was missing. And the thing that was missing for me was proper security.

When you load Linpus, it doesn’t ask you for a password. It just loads to the desktop. There is an option in the settings to tell it to ask you for a password after you return from a screensaver, but not when you turn on the laptop or when you return from sleep. This just doesn’t sit well with me because if someone steals my laptop, they will have access to all my accounts via Firefox (no, I am not interested in telling Firefox to not remember passwords). Additionally, not having the ability for more than one user accounts, is a problem for me as well as my husband would like to use the netbook when we are vacations too.

So overall, I like the Aspire One. It’s much better than the similarly priced Asus Eee PC 701, but I will be installing Ubuntu Intrepid Ibex on it this weekend already.