This is the fourth article in a series on common usability and graphical user interface related terms [part I | part II | part III]. On the internet, and especially in forum discussions like we all have here on OSNews, it is almost certain that in any given discussion, someone will most likely bring up usability and GUI related terms – things like spatial memory, widgets, consistency, Fitts’ Law, and more. The aim of this series is to explain these terms, learn something about their origins, and finally rate their importance in the field of usability and (graphical) user interface design. In part IV today, we focus on a dead horse Fitts’ Law.

The scientific articles linked to in this story might not be accessible to you. You need a subscription to the distributors of these articles in order to read the full-text versions. Students can usually access these articles either by using a computer at the university campus, or by setting up a proxy at home. Contact your university’s IT dpt. for more questions.

Fitts’ Law is an interesting beast. It is one of the few consistently proven (and therefore reliable) laws in ergonomics, it is more than 50 years old, but at the same time, it has been cited so often on the internet that is has been beaten senseless, making it almost sound ridiculous. So, what is Fitts’ Law? How did he come up with it? And is it truly applicable to computer mouse cursor movements?

Fitts’ law is actually a formula [like Wikipedia, we use the Shannon formulation] that describes the time it will take for someone to move a device (stylus, finger, etc.) from one target to another (T), taking several things into account: the constants start/stop time of the device used (a) and the inherent speed of the device (b), and the variables distance between starting point and target (D) and the width of the target along the axis of motion (W). The consequence of this formula is that speed and accuracy are dependant on the width of the target and/or the distance between starting point and the target. [Thanks to Wikipedia for this clear explanation]

What makes this seemingly harmless formula so important is that it is one of the reasons why we use a computer mouse today. Stuart Card, Alan Mewell, and Tom Moran used Fitts’ law to test various human-computer interaction devices while working at the Palo Alto Research Center, and from these studies, it came forward that the mouse was the best way [.pdf, see page 34] for a human to interact with a graphical interface on a computer, and hence, this is why Xerox decided to commercialise the mouse in their Xerox Star computer, mentioned earlier in this series. When Apple came to PARC, they obviously saw this too, leading to the mouse being included in the Macintosh.

This was not the only research done using Fitts’ law. Many researchers have proven the law, and a lot have also tried to extend it, most notably resulting in the Accot-Zhai Steering law, which expanded Fitts’ law from a movement in a single dimension to movements in two dimensions (such as a computer screen).

Fitts’ research [.pdf] that led to the law had, of course, little to do with computers (it being 1954 and all). Interestingly, however, one of the three sub-experiments that he conducted bore a striking resemblance to movements performed in present-day computing. Basically, he asked subjects to move from one target to another on a flat plate, moving a stylus from a vertical starting area to a vertical target area, where he manipulated the distance between the targets, as well as the targets’ width. The goal was to place the stylus on the target area, without touching any of the error areas adjacent to the targets. Even though this movement was fairly one dimensional, you can easily see how this relates to mouse movements, or, better yet, stylus movements on a PDA or a tablet.

Now, what does this all mean for designers of graphical user interfaces? First of all, it means that the most desirable area for a certain function to be is right underneath the mouse cursor; meaning, the distance to the target is zero. That is why pop-up menus are more easily accessible than pull-down menus – ignoring the obvious issue of discoverability, that is. It is also argued that pie menus are better then vertical menus, seeing the height of an item in a traditional menu is fairly low, making it harder to accurately hit, compared to a pie menu where each item’s size expands from the base, making it easier to hit them. 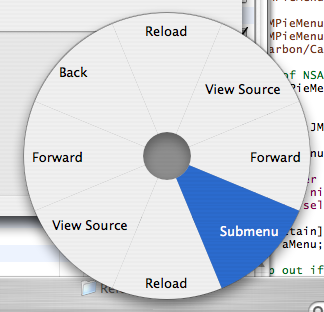 From this it is derived that the more important a user interface element is, the closer it ought to be to the mouse cursor. That is why I, personally, demand of my browser that its bookmarks bar is placed right atop the content area of a window; besides the content area, this is my most used interface element in a browser, and hence, I want it as close to my cursor as possible.

A second obvious conclusion is that targets in a graphical user interface (such as buttons, menus, icons, and so on) should be as large as possible, making it easier to hit them. Personally, I experience this little fact every day when trying to do window management in Windows XP; since Windows lacks decent window management keyboard shortcuts (for me, that is) compared to, say, OS X, I am more or less forced to use the buttons in the window titlebar. However, they are fairly small, and when you are very busy, it is very easy to miss them. Obviously, you cannot make items so large that it becomes ridiculous, but it is good practice to not place often-used functionality under small, hard-to-hit buttons.

The most debated consequence of Fitts’ law is the importance of edges and corners. Because the mouse cursor cannot travel beyond screen edges and corners, they are seen as infinitely large targets – which Fitts’ law really likes. The two prime examples of this are the global menubar in the Mac OS, and the start button in Windows; you can blindly move the mouse to the lower-left corner of a Windows desktop, and it will always hit the clickable area of the start button (since my Vista laptop died due to hardware failure, I cannot confirm this behaviour for the new start ‘orb’ in Windows Vista). Windows also uses Fitts’ law in the taskbar, allowing you to hit entries in the taskbar despite the fact that the buttons do not cover the bottom two pixels of the taskbar.

Many have proclaimed Fitts’ law to be holy, and that interfaces elements that respect Fitts’ law are always better interface elements than those that do not. Take the global menubar in Mac OS X for example: even though there are a whole lot of reasons to think of to put the menubar up there (I prefer it too), the discussion almost always ends up discussing the merits of Fitts’ law. This view, that a global menubar is better because of Fitts’ law, is a tad bit, dare I say it, short-sighted.

Despite its proven robustness, Fitts’ law has a serious shortcoming: Fitts’ law only takes into account untrained movements, which, in today’s world of ubiquitous computing (at least here in the western world), is a bit of a stretch. Many people in our world have been using computes for a long time, and have trained themselves to hit targets with their mouse or touchpads, getting better at it with the hour. I distinctively recall my grandparents buying their first computer about 8 years ago, and the troubles they had with using the mouse to accurately hit icons. When we visited them again, a week later, their troubles with hitting targets had gotten a lot less apparent.

In other words, Fitts’ law can only be applied to its fullest on untrained individuals, who have never used a mouse to navigate a graphical user interface before. Since this group of people is getting smaller by the day, the importance of Fitts’ law also diminishes. It is still important, but the thorough training people have gone through over the past 15 years with computer mice does affect its importance.

Fitts’ law is important for designers of graphical user interfaces because it is one of the few “constants” in ergonomics, and it provides a set of easy to remember and to apply rules and guidelines on how to design interface elements, and where to place them in your user interface. However, its importance must not be overstated; remember that it does not take training into account.

Consequently, you must examine your user base when it comes to the level of compliance to Fitts’ law you need. Find out if they are long-time users, with a lot of experience, or if they are people that have little experience with computers, and adjust your adherence to The Formula accordingly.